Seeing Star Wars: The Force Awakens was one of Daniel Fleetwood’s last wishes, and on Thursday, that wish came true.

A longtime Star Wars fan, Fleetwood feared he would not live to the seventh movie’s official release date of Dec. 18 after doctors in July gave him only two months to live from his cancer diagnosis. To make sure he would still be able to see the film, Daniel and his friends and family started a Twitter campaign called #forcefordaniel, which received widespread media attention. Star Wars stars Mark Hamill and John Boyega, who play Luke Skywalker and new character Finn in the upcoming film, retweeted the story with the #forcefordaniel hashtag, further boosting the campaign.

All that effort has finally paid off. “We would like to thank the awesomely talented JJ Abrams for calling us yesterday to tell us Daniel was getting his wish granted!” his wife Ashley wrote in a Facebook post Thursday. “Today the wonderful Disney, Bad Robot and Lucasfilm teams made his final dream come true, Daniel just finished watching an unfinished version of Star Wars: The Force Awakens!!!”

A LucasFilm spokesperson confirmed that Fleetwood received a screening of the film.

“If I got to see the movie, I might actually die from happiness,” Fleetwood previously told PEOPLE. “Growing up, I would watch the movies over and over and analyze every little detail. I hope I get to see what happens.” 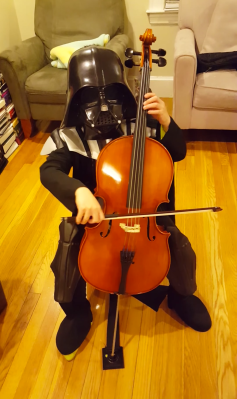 Watch This Adorably Tiny Darth Vader Play the 'Imperial March' on a Cello
Next Up: Editor's Pick