Climate Change Is the ‘Mother of All Risks' to National Security

Boat docks sit empty on dry land, as Folsom Lake reservoir near Sacramento stands at only 18 percent capacity, as severe drought continues in California on Sept. 17, 2015.
Mark Ralston—AFP/Getty Images
Ideas
By Jon Powers
Jon Powers, an Iraq Veteran, served as the Federal Chief Sustainability Officer and Special Advisor on Energy to the US Army in the Obama Administration, and is currently Managing Director of Public Sector Business Development with Bloom Energy.

Serving at Pentagon, I worked with leaders who studied threats ranging from insurgent groups to rogue states. One of the U.S. military’s less-noticed findings, however, is that there is clear consensus that climate change poses an immediate risk to national security.

Military leaders recognize that they must lead by example and address the threat of climate change, and they are actively pushing goals to dramatically scale up renewable energy. The U.S. must replicate this leadership and seize the opportunity when countries meet this December in Paris to finalize a global deal on climate change.

To the military, climate change acts as a threat multiplier, exacerbating threats in already unstable regions of the world. Just as we act aggressively on information from the national security intelligence community, we must also act on the scientific evidence from our nation’s best climate scientists.

In the security world, decisions are made by a careful evaluation of risk. And climate change is the mother of all risks. As the Intergovernmental Panel on Climate Change warned last year, without action on climate change, our children and grandchildren will face “severe, pervasive and irreversible impacts.”

The U.S. is already suffering from the impacts of climate change. In 2014 alone, there were eight extreme weather and climate events with losses of more than $1 billion. California is currently facing one of the worst droughts on record, and sea-level rise threatens some of the U.S.’ most critical military installations. Without a global agreement in Paris, the world—including the U.S.—is headed toward potentially catastrophic climate impacts.

That’s why a bipartisan group of 48 national security and foreign policy leaders—including three former Secretaries of Defense and two former Secretaries of State—recently issued a statement urging the highest levels of American government and business to take domestic and international action to fight climate change.

Fortunately, the agreement that will be negotiated in Paris is one the U.S. should be proud to get behind. More than 150 countries have submitted plans for how they plan to tackle climate change domestically, including countries once reluctant to act, like China and India. American leadership has been key to getting us to getting these countries on board and agreeing to do their fair share. These countries are also acting because it’s in their self-interest to do so—for their own health and security.

America stands to benefit from a global climate agreement. An agreement in Paris would unleash clean energy innovation in the U.S., putting us back in control of our energy security. Our country is well-poised to lead in a global clean energy economy. The U.S. was the second largest investor in renewable energy in 2014, and in September the Obama Administration announced $120 million worth of funding for renewable energy innovation. And the Department of Defense has led the way here as well, from developing advanced biofuels to building clean energy bases.

The investment signal Paris would send on clean energy would create jobs here at home, one of the reasons businesses and investors have also been vocal in their support for action in Paris.

Last month, 81 companies with more than nine million employees working across all 50 states signed the American Business Act on Climate pledge, which declares support for an ambitious agreement in Paris and commits to a range of action including investment in renewable energy. Representing a combined $3 trillion in annual revenue, the backing of these companies should show all of us what U.S. leadership on climate is delivering: real progress on a global problem, underpinned by implementable solutions that many here and abroad strongly support.

America has always led on great challenges, and climate change should be no exception. A strong global climate agreement in Paris would usher in a clean energy economy while building a safer, stronger America. 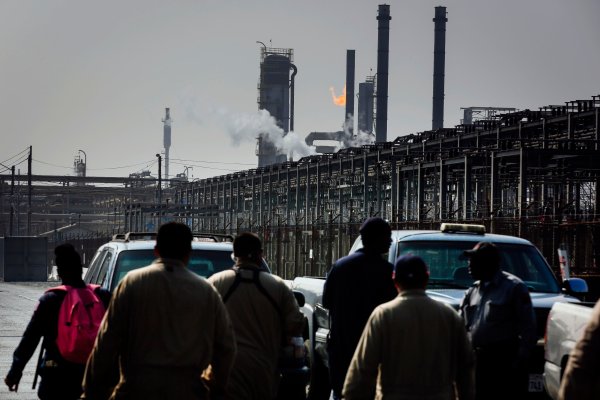 N.Y. Probes Whether Exxon Lied About Climate Change
Next Up: Editor's Pick