Here's What Happens When You Put More Women in Government

Canadian Prime Minister Justin Trudeau made headlines Wednesday when he announced that half of his Cabinet ministers are female, a decision he justified with the simple explanation that “it’s 2015.” The move won him international praise and more than a few swoons.

Canada isn’t the first country to take steps to increase women’s representation in government. The countries with the most female lawmakers have made major strides on issues such as education, labor-force participation and paid leave. Each of the countries below has either a parliament or a ministry that is at least 50% female, while women make up only 19% of the U.S. Congress and only four of Obama’s 15 Cabinet members.

“We know that companies with more gender-balanced leadership teams significantly outperform companies with only men at the helm,” says Avivah Wittenberg-Cox, CEO of Twenty first, a consulting company that focuses on building gender-balanced businesses. “Why wouldn’t this be even more true at a country level?” Here are a few examples of countries with lots of women in government who are outperforming the U.S. on various levels:

Sweden
The Swedish ministry is 52% female and their Parliament is 43% women. So it shouldn’t be any surprise that Sweden is regularly held up as an example of a paradise for working women. Their public benefits assume a dual-income family where both men and women are working and contributing at home, and as a result they have the among the highest female employment in the E.U. and almost the lowest child poverty. Both parents are entitled to 16 months of paid family leave (to be divided as a couple), with 13 months of that leave paid at 80% of their income and the rest at a flat rate. Compare that with U.S. policies, where the absence of paid family leave causes enormous stress for women and families, and often leads women to drop out of the workforce altogether.

Rwanda
In Rwanda, the Parliament is almost 64% female, according to the Inter-Parliamentary Union, and for tragic reasons. After the country was ripped apart by genocide in 1994, Rwanda found itself with a population that was 70% female, since thousands of men were killed in bloodshed between the Hutu and Tutsi ethnic groups (of the 780 judges in the country before the massacre, only 20 survived). Before the genocide, women held only 10% to 15% of Parliament seats, according to the Harvard Kennedy School, but the massacre of so many men created a power vacuum that Rwandan women quickly filled.

However unhappily it came about, the new female legislations helped pass laws allowing women to own land and open bank accounts. A quota introduced in 2003 mandated that 30% of all government roles be reserved for women, and only women can vote for these women-only seats. Fittingly, it’s women who have felt the benefits. Rwanda now has a lower maternal mortality rate than other countries in Sub-Saharan Africa, and 87% of women are in the labor force — compared with 57% of the women in the U.S., according to International Labor Organization data cited in the Clinton Foundation’s No Ceilings Report.

Finland
Finland has always been ahead of other countries in female representation — it was one of the first countries in the world where women had the unrestricted right to vote and run for Parliament. And while it’s hard to separate Finland’s extremely progressive policies from the fact that the government has always had more female representation than most, those policies also can’t necessarily be directly attributed to the influence of Finnish women in government.

So take these two facts as you will: the ministry in Finland is 62% female, and they’ve managed to create a public education system that could be the new gold standard. Finnish students far outperformed students from the U.S., the U.K. and Russia in all academic areas, and they’ve consistently hovered near the top of academic excellence, according to PISA, the international standardized test. Yet Finnish schools rarely have standardized tests, emphasize play over homework, pay their teachers well, and everyone goes to public schools.

The country, ranked by some as the best place to live in the world, now has stellar education, generous paid maternity leave and heavily subsidized child care hardwired into society. And women as a permanent fixture in government. Draw whatever conclusions you want.

“Governments are meant to represent the people who elect them,” says Wittenberg-Cox. “And yet it is only once women gain political power that subjects considered to be ‘soft’ are dealt with seriously – from child care and reproductive rights to education and sustainability.”

Sadly, these countries are still outliers. Worldwide, parliaments are only 22% female, and there are 37 countries where women make up less than 10% of the government. But if this is what happens in the handful of countries where women are more equally represented, imagine what could happen if other leaders followed Trudeau’s example. 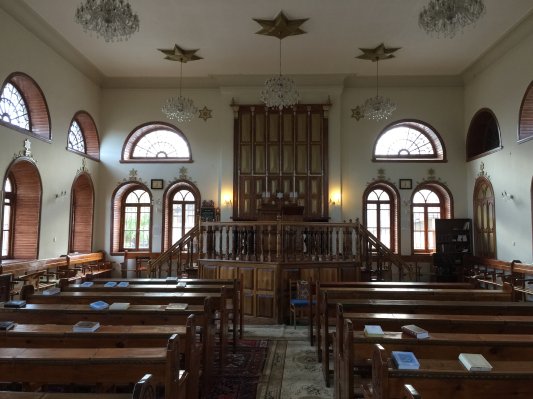 Azerbaijan Is an Oasis of Tolerance in the Middle East
Next Up: Editor's Pick