Read “What the Legal Battle Over Trump University Says About Its Founder” in the Nov. 16 issue of TIME.

Most of Donald Trump’s return fire in the Trump University litigation has been directed at Eric Schneiderman, a Democrat who was elected New York State attorney general in 2010. It’s a smart strategy.

Schneiderman didn’t file his case until August 2013, over two years after he began a heavily leaked investigation and three years after the initial civil class action was filed in San Diego, the allegations of which Schneiderman largely piggybacked on. A trial-court judge has now ruled that as a result, most of the alleged victims whom Schneiderman claims to represent are barred from asserting claims because the statute of limitations has expired. The attorney general has appealed the decision.

Worse, Trump was able to fire back with a persuasive ethics complaint against Schneiderman.

The strongest claim in the complaint involves a provision in the state Public Officers Law that prohibits state officials from soliciting contributions from those with interests before their agencies. Trump’s complaint alleges four instances in which Trump Organization lawyer Michael Cohen and Trump’s daughter Ivanka (an executive vice president of Trump’s company) were solicited by Schneiderman or people working for him for campaign donations or help in raising donations while Schneiderman’s investigation was ongoing. Affidavits submitted as exhibits to the complaint also charge that Schneiderman mentioned the case to Cohen and Ivanka in private discussions but assured them that, according to Ivanka’s affidavit, it was “going nowhere”—that his office merely needed to “go through the motions.”

Schneiderman told me that he never solicited money from anyone involved in the Trump organization or discussed the case with them and that any affidavits to the contrary, including Ivanka’s, “are perjurious.”

An email to Trump’s lawyer, which is also an exhibit in the complaint, seems unambiguously to be a solicitation. And Ivanka seems unlikely to risk a perjury prosecution with an affidavit that is at most tangential to her father’s fortunes. She has a reputation for not having inherited his habit of over-the-top statements. As Donald Trump’s own sworn deposition in this case indicates—in which, for example, he does not claim to have handpicked the teachers—he, too, seems to watch what he says when under oath.

Schneiderman pointed out that the state ethics commission had decided, with no explanation, not to act on Trump’s complaint. Which is true, but that may say more about the oft-ridiculed Albany ethics enforcers than it does about Schneiderman. 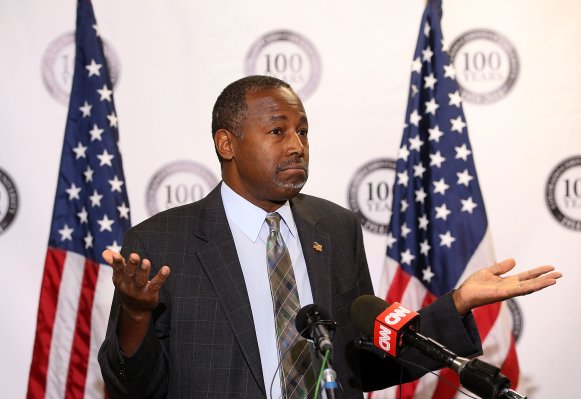 Ben Carson Has A Unique Theory About the Pyramids
Next Up: Editor's Pick