The generals who orchestrated Burma’s political transition designed a constitution with a singular purpose: preventing the nation’s democratic icon, Aung San Suu Kyi, from ever becoming President. But three days before landmark nationwide elections, the Nobel Peace Prize laureate made clear that such constitutional trivialities would not stop her should her National League for Democracy (NLD) prevail, as expected, in the Nov. 8 polls. “I will run the government,” Suu Kyi said at a press conference outside her lakeside villa in Burma’s commercial capital, Rangoon. “And we will have a President who will work in accordance with the policies of the NLD.” What will her position be? “Above the President,” Suu Kyi responded. “I have already made plans.”

The military brass that ruled Myanmar, as the country is officially known, has thwarted Suu Kyi before. In 1990, the NLD triumphed in polls, but the junta ignored the result. Suu Kyi spent most of the intervening two decades under house arrest, until her release in late 2010. But isolation only heightened her appeal. Wherever Suu Kyi has gone on the campaign trail over the past couple months, thousands of fans have worshipped at the feet of “the Lady,” as she is fondly known.

There have been many attempts to tarnish Suu Kyi’s halo. On Burma’s lively social media, forces aligned with the military’s proxy Union Solidarity and Development Party have, without evidence, accused her foreign advisers of being spies intent on destroying national unity. Even Western observers, who have placed Suu Kyi on a pedestal alongside the likes of Nelson Mandela, have lamented a lack of democratic debate within the NLD itself.

At home, extremist Buddhist monks have whispered that Suu Kyi is being swayed by Islamic forces, even though the NLD has not fielded any Muslim candidates. (Muslims officially make up around 5% of Burma’s population.) At the same time, foreign human-rights advocates have been disillusioned by Suu Kyi’s refusal to specifically condemn the persecution of some 1 million Rohingya Muslims in the nation’s far west.

On Thursday, Suu Kyi fielded questions on the plight of the Rohingya, who have been forced into squalid camps and robbed of their right to vote in these elections. “I think it is very important that we should not exaggerate the problems in this country,” she said. “There’s a Burmese saying: You have to make big problems small and small problems disappear. It’s not a question of exaggerating small problems into big ones and big ones to the extent that they are totally unmanageable. I’m not saying this is a small problem. I would promise everyone who is living in this country proper protection in accordance with the law.”

Like her answer on the Rohingya, her campaigning, at times, has been short on specifics. When queried on NLD economic or social policies, Suu Kyi has often instructed people to “read the election manifesto.” On Nov. 5, she refused to discuss the way in which she will implement her primary goal of national reconciliation. “No, I’m not going to enlarge on it,” she said, “because there are people who don’t want national reconciliation, and I don’t want them to start making counter plans.”

Yet Burma’s democratic heroine remains just that. Her adoring fans could well carry the NLD to victory on Sunday. In Rangoon, housewives crammed into open-air trucks and waved red flags emblazoned with the NLD’s fighting peacock. Young Burmese have flocked from overseas to pledge allegiance to their Lady. Soe Moe Thu returned from business-management studies in Malaysia and is now running for parliament as an NLD lower-house candidate in the Irrawaddy river delta region. “If you look at the NLD, it emerged from the will of the people,” he says. “The NLD stands for the people, and [Suu Kyi] has all the qualities of a good leader.”

At least one-third of Burma’s citizens are ethnic minorities, some of whom have spent decades battling a regime dominated by the Bamar majority. Still, even representatives from ethnic political parties contesting the Nov. 8 polls recognize that she is the only force that can oppose a military determined to retain key levers of power. “There is no one else besides Aung San Suu Kyi,” says Sai Nyunt Lwin, general secretary of the Shan Nationalities League for Democracy, which represents the populous Shan ethnic group. “We have to put our hopes in her.”

And as Suu Kyi herself made clear on Thursday, for all the criticism of the NLD, it is competing against a military-linked government that turned one of Asia’s most promising young nations into an economic basket case. For nearly five decades, the military brutalized the populace, turning Burma into a byword for tropical tyranny. “When I’m asked whether we will be able to run a good government,” Suu Kyi said, “I always [say], it can’t be worse than what we’ve had already.” 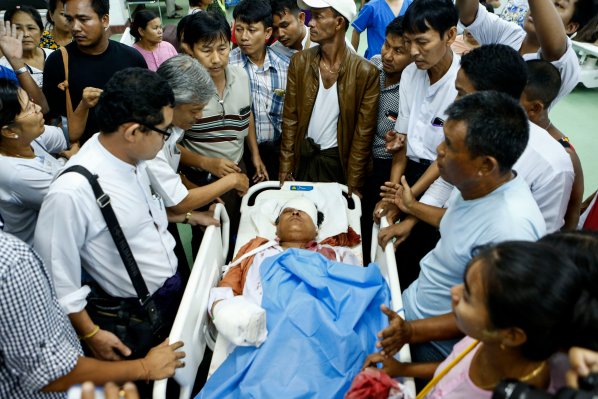