Taiwan's President Under Fire Over Historic Meeting With China

Tuesday’s announcement that the leaders of China and Taiwan will meet for the first time in their histories has been met by scattered protests in the latter’s capital Taipei, where outgoing President Ma Ying-jeou faced an hour-long grilling from journalists amid widening calls for his impeachment.

“Because the next election is only a couple months away, the Ma government is essentially a caretaker administration,” said Chiu Hsien, a legislative candidate for anti-Beijing New Power Party, reports the Taipei Times. “What right does he have to make such an important decision about Taiwan’s safety and future when he has approval ratings of only 9.2%?”

Taiwan and the mainland have endured icy relations since their split in 1949 at the end of China’s civil war, with each government still officially claiming sovereignty over their combined territory. However, the neighbors have grown economically closer over the past eight years that Ma’s party, the Kuomintang (KMT), has been in power.

But a slowing economy and public mistrust regarding its perceived cozying to Beijing has seen support for the KMT plummet, even though Ma remains personally ineligible for re-election having already served two terms. The Beijing-skeptic Democratic Progressive Party (DPP), led by U.S.- and U.K.-educated lawyer Tsai Ing-wen, has since surged into a commanding lead.

This worries Beijing, and analysts believe that Saturday’s meeting between Ma and Chinese President Xi Jinping in Singapore — although strictly as representatives of their respective parties, rather than heads of state — is an attempt to solidify cordial ties before a likely DPP victory.

“Beijing applauds Ma Ying-jeou’s contribution,” says George W. Tsai, professor at Taiwan’s Chinese Culture University. “They may also want to put the thought into people’s minds about where cross-strait relations will go if another party gets into power.”

Ma, however, insisted during Thursday’s press conference that his intention was simply to help his compatriots by “normalizing” bilateral relations. Taiwan was expelled as a U.N. member state in 1971 as world governments belatedly began recognizing a resurgent communist-ruled mainland, hobbling the island-state of 23 million in matters of international diplomacy. “The object of our decision is not the next election,” Ma said. “It’s the happiness of the next generation.”

According to the DPP’s Tsai, Ma is putting his personal legacy ahead of the public interest. “The people will not allow [Ma] to limit Taiwan’s future purely for his own political credit,” she said, reports Agence France-Presse.

That said, Tsai’s party has stopped short of joining calls to recall Ma, but did urge him to “answer questions at the legislature regarding the process [of arranging the meeting],” a DPP spokesman tells TIME, highlighting a 2011 television interview in which Ma promises not to meet with any mainland Chinese officials during his term.

However, the DPP may ramp up its objections should, as expected, it win Taiwan’s Jan. 16 national elections, says Shih Chih-yu, professor at Taiwan National University, who even raises the possibility of treason charges against Ma.

“There will be reaction from the [DPP] to control the impact of this meeting, especially after they come to power in order to change the parameters [of bilateral ties],” he says. 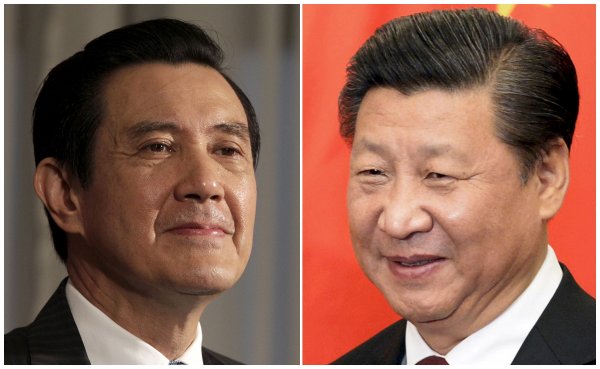 What to Know About the Historic China-Taiwan Meeting
Next Up: Editor's Pick