This Company Wants to Make Any Watch Smart

Choosing any wearable device is a compromise. Maybe you’re an early adopter willing to pay more for the ability to be hyper-notified by the latest tech and don’t mind if strangers see a screen on your wrist and assume you have glasshole-ish tendencies. Maybe you’re willing pay less and wear a rubbery band without much personality if it will look at home in the gym and tell you everything it can about what’s happening in your body, at every moment that you are running, sleeping or continuing to have a heartbeat.

San Francisco startup Chronos is aiming its new device, which launches Thursday, at the watch-loving compromiser: people who prefer pretty analog watches to be the things on their wrists but would really like them to have the most basic features of a fitness tracker and a smart device.

“We have developed a small, tiny disc that gives you all the very best of today’s wearable tech, but let’s you keep the watch you already wear,” Chronos founder and CEO Mark Nichol said.

The metal Chronos disc is designed to resemble watch casing, so that it largely disappears when one uses the micro-suction cups on one side to attach it to the back a regular old timepiece. And it is tiny enough—thinner than 3 mm with a 33 mm diameter—to disappear behind the faces of about 80% of watches, according to the company.

Once the device is paired with a smartphone via Bluetooth, that disc can then use different patterns of lights and haptic buzzes to alert the user that a spouse has sent a text or an Uber has arrived downstairs. Meanwhile, it tracks steps and calories burned that can be viewed through an Android or iOS app and can interpret some gestures so that, for example, a tap on the face of the watch will silence a call.

MORE See the Wearable Tech of the Future

For those out there who believe flashing purple LED lights defeat the purpose of Chronos’ discreet design, the notifications can be set to only buzz. There is a limit to how many such patterns one can easily commit to memory and differentiate. Chronos co-founder Luke Fromowitz says they believe that adding more than five “special contacts” can turn into a jumble. While that might seem too limiting to some, for others that may be just the kind of limit they need to wean themselves off checking their phone without having to worry that they’ll miss the couple people or notifications they really care about.

In 2014, Google said there were really two types of adopters interested in their smartwatches: people who wanted to know everything right now, who were over reaching into their pocket or missing anything, and people who actually wanted to disconnect more and check their phone less, using the smartwatch as a gatekeeper that would only deliver select alerts they designated as the most important. And the Chronos team believes the latter type could quickly be convinced to pay $99-$129 for their disc rather than $549 for an Apple Watch.

There are plenty of things that smartwatches and fitness trackers can do that this won’t do, so whether this is really offering the best of wearable tech will be up to the consumer. If you really want to track your sleep patterns, this is not for you, because people do not typically wear their jewelry to bed. And if you want to be able to glance down during a meeting and see exactly what message someone has sent to you or use your watch to pay for a bottle of water, this isn’t going to deliver that either. But if you just want the basics from a sleek little device that can be slipped on and off any watch you already own, this might be your kind of compromise.

In the United States, the watch market remains a $11 billion dollar industry that, according to Euromonitor, has seen growth of 5% in 2015 and will likely continue to see slight growth in the coming years. The fact that 2% of people, according to NPD, have so far opted to buy a smartwatch may not be causing the CEOs of big-time watch companies to wake up screaming in the night. But Chronos is going to have appeal as a partner for companies that want to promise their watch-buying customers a little 21st-century functionality with their timeless, computer-less styles.

Though he doesn’t have any partnerships to announce now, Nichol said their aim is to be sold wherever watches are, starting with big chains like Macy’s. As of Thursday, the devices will be available to pre-order for $99 and will retail for $129 after they start shipping next spring. Though they’re still in the prototype stage, Chronos estimates that the battery life for the wireless-charging disc will be about 36 hours.

“All the smartwatches right now are adding more complexity to your behavior and to your daily life,” Fromowitz said. “Our whole mission is trying to de-complicate it.” 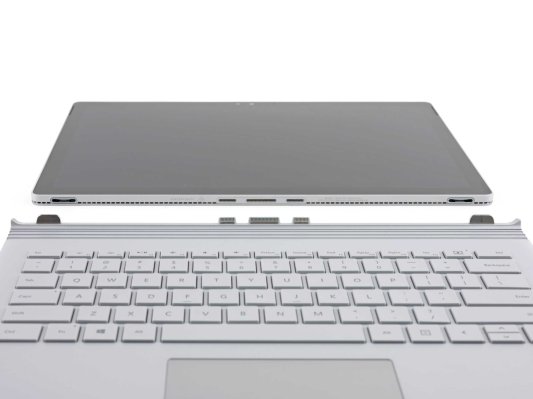 See Inside Microsoft's First-Ever Laptop
Next Up: Editor's Pick