Jeb Bush is talking about his father again.

Since his campaign launch in June, the Republican presidential candidate has periodically talked about his father, George H.W. Bush, who served as vice president and president. This week, it came up again twice.

During an interview on “Meet the Press” Sunday, Bush talked with host Chuck Todd about how much he loves his dad.

“I love my dad. I’d kill for him. I’d go to prison for him because, I love him so much,” he said. “Thankfully I haven’t had the need to do that.”

After a speech at a charter school in New Hampshire Wednesday, Bush responded to a question about his father with more praise.

But, he added, if his father said he was “disappointed” in him, it would send him into a “deep spiraling depression for days.”

Here are some other times that Bush has talked about this father on the campaign trail.

February: During a speech on foreign policy, Bush said that he would follow his own path. “I love my father and my brother,” he said. “But I am my own man—and my views are shaped by my own thinking and own experiences.”

April: During a campaign stop in New Hampshire, Bush joked about his family ties, saying he is not running “to try to break the tie between the Adams family and the Bush family.”

June: On his father’s birthday, Bush tweeted a photo of his dad. “To the greatest man I’ve ever known. Happy Birthday, Dad,” he wrote.

August: Bush opened an online campaign store with a T-shirt praising his dad. “My dad is the greatest man I’ve ever known, and if you don’t think so, we can step outside,” it reads.

At the first Republican debate, Bush said the bar was higher for him because of his father. “That’s fine. I’ve got a record in Florida. I’m proud of my dad, and I’m certainly proud of my brother,” he said. “In Florida, they called me Jeb, because I earned it.”

September: Bush argued that his father would set a good example for his presidency on foreign policy. “I know how to do this because, yes, I am a Bush,” he said. “I happen to have seen two really good presidents develop relationships with other countries.”

October: Bush said his campaign was helping keep his father’s spirits up. “I noticed he’s not watching CSI reruns anymore,” he said. “He’s watching FOX, getting mad about people that attack me. I feel like I’m making a contribution to keep him strong.”

November: Bush included an email from his father in a new book in which he talks about he loves. “It is so good of you that I have gotten over my being cropped out by the photographer,” the elder Bush wrote. 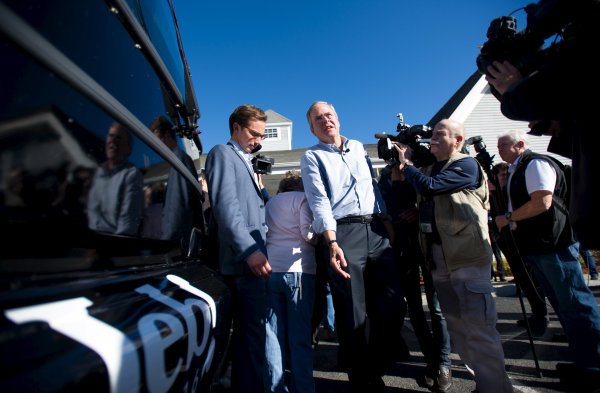 Bush Boards a Bus Seeking to Shift Gears
Next Up: Editor's Pick