San Diego Airport Stops Landings Due to Nearby Shooter

The San Diego International Airport stopped all landings after police reported an active shooter in the city’s Little Italy neighborhood.

A man has been sporadically firing in an apartment complex in the area, police said according to the Associated Press. So far no one has been reported injured. Officers were responding to a domestic violence call when they heard gunshots at the complex a little after 9 a.m. on Wednesday. The shots camewithin inches of hitting the officers, 10 News reports.

The police said on Twitter that people should “Stay away from all windows until further notice and Shelter in place.”

SWAT teams were in the area and numerous streets in the immediate vicinity were shut down by around 10 a.m. local time, according to the San Diego Union-Tribune.

City Tree Christian School and Washington Elementary School have been put on lockdown as a precautionary measure, the San Diego Police reported on Nextdoor, a neighborhood social network. “Parents are advised to stay out of the area. The children are safe,” the police posted.

The shooting has caused disruption at the San Diego International Airport. “We are allowing departures but we are not landing aircraft due to the active shooter situation under the approach path,” Ian Gregor, a public affairs manager at the Federal Aviation Administration (FAA) told TIME. 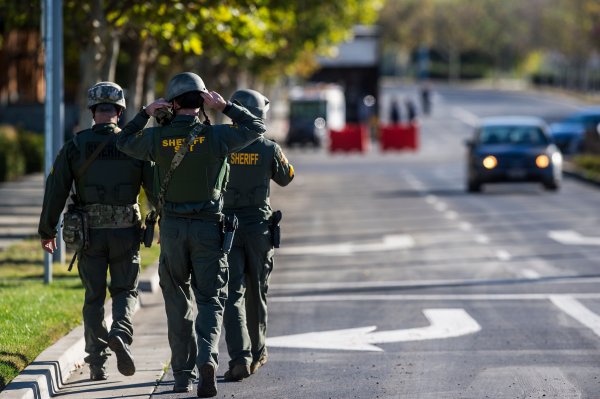 5 Wounded After Stabbing Spree at UC Merced
Next Up: Editor's Pick