Review: Trumbo Is a Vital Lesson in Democracy

Among movies about old moviemakers, Trumbo works better, and has more to say about the world at large, than My Week With Marilyn or Hitchcock. Although for Hollywood golden-age screenwriter Dalton Trumbo, the world was nowhere near as big as he was. The same is true of this sly, admirable but single-minded bio-pic.

Bryan Cranston (Breaking Bad) plays Trumbo, a cranky WWII vet, intellectual and unabashed member of the American Communist Party. In the 1930s and ’40s, his literate scripts may have slipped idealism in amongst the melodrama, but Cold War-mongers only heard Soviet-influenced agitprop. As the House Un-American Activities Committee convenes in 1947 and subpoenas those suspected of planting propaganda in films, Trumbo—one of the “Hollywood 10”—is convicted of contempt of Congress for refusing to testify, and sent to prison.

Released in 1951 after nearly a year away, Trumbo returns to his loving wife (Diane Lane) and family, including oldest daughter Nikola (Elle Fanning). But his profession isn’t as supportive. Unable to get a job due to ongoing Congressional witch hunts and the whispered machinations of gossip maven Hedda Hopper (tart-tongued Helen Mirren), Trumbo is forced to use friends as “fronts” or write under pseudonyms (his friend Ian McLellan Hunter won a 1953 Oscar for Roman Holiday, while 1956’s The Brave One won one for a made-up man). After director Otto Preminger announces Trumbo will adapt Exodus for him, and Kirk Douglas does the same for the Trumbo-penned epic Douglas will produce star in, Spartacus, the Blacklist, and Trumbo’s exile, is over. Its shadow, however, took its toll.

All this inside-the-Brown Derby drama is catnip for cinephiles. Others may feel less invested. Yet the story grabs you: Director Jay Roach and screenwriter John McNamara, working from a nonfiction book, entertain with Trumbo’s habit of typing his scripts while in the bathtub, and there are B-movie-style depictions of his mercenary work for a genial hack producer (John Goodman, always sublime). The urgency here comes, and keeps coming, from the fallout from free speech being muzzled. Come for the smooth supporting turns by Louis C.K. and Alan Tudyk, the impersonations of icons like John Wayne and Douglas (played with chin-y gusto by Dean O’Gorman) and for Cranston, who fills the air with craggy, growly authority. Stay for the listless yet vital lesson in democracy. 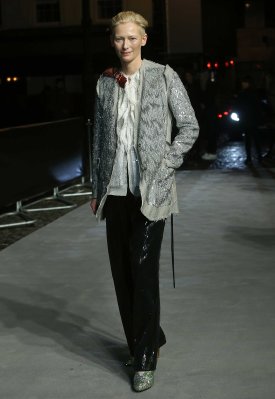 Celebrate Tilda Swinton’s Birthday With 25 Photos of the Shape-Shifting Actress
Next Up: Editor's Pick