Why Canada Wants to Hit Pause on the Keystone Pipeline

While Canada’s new Prime Minister Justin Trudeau has been called the country’s environmental savior by some, there’s one decidedly non-green policy he’s yet to shake: his long-standing support for the controversial Keystone XL pipeline. But with approval of the project facing growing doubts in the U.S., both Trudeau and the company behind the pipeline are taking a new tack: running out the clock.

TransCanada this week asked the U.S. Department of State to suspend its evaluation of the pipeline to bring oil from Alberta’s oil sands to the U.S. Gulf Coast (the White House quickly shot down the idea of a suspension). And Trudeau, who was sworn in Wednesday, has largely gone quiet on the subject. But what looks like a strategy to play for time could be aimed at a simple political reality: President Obama is increasingly expected to reject the project, and its supporters are hoping for a more friendly face in the White House after the 2016 election.

There’s no indication that TransCanada, which insisted on Tuesday that its request had nothing to do with politics, wants to call it quits for good. And operating separately from the company’s talks with the U.S., Trudeau hasn’t officially changed his position or spoken about the company’s request to suspend its evaluation.

So Canada’s new Prime Minister now faces a diplomatic balancing act, and it’s likely that his promise to improve country’s relationship with the U.S. will take priority over his support for Alberta’s troubled oil industry, analysts say.

“This is a major diplomatic irritant,” said Adam Scott, the Climate and Energy program manager for Environmental Defence, which opposes the pipeline. “A new Prime Minister would want to move on and rebuild this relationship.

“Its not a deal breaker,” for Trudeau’s relationship with Obama like it was for Trudeau’s predecessor Stephen Harper, Scott said.

In the wake of the “Trudeaumania” surrounding his October election, Canada and the world have anticipated that Trudeau will move away from Harper’s oft-criticized climate policies. Trudeau has said he would woo Obama into accepting the pipeline with a renewed focus on environmental regulations on the transportation and extraction of oil.

The pipeline would transport up to 830,000 barrels of crude per day. The extraction from the tar sands releases an estimated 17% more greenhouse gas emissions than traditional drilling, according to a draft State Department environmental impact study. (The pipeline is a contentious issue in the U.S., with environmentalists saying it would greatly contribute to climate change and conservatives touting it as a boon for the economy.)

The issue has increasingly become a political headache for Trudeau: A top campaign official was forced to step down a week before the election over a personal email to TransCanada instructing the company on how to lobby the government. His stance has left many Canadians scratching their heads, and some predict he will ultimately drop his support for it to maintain his newly-elected progressive shine.

“Trudeau has repeatedly said that he wants to keep global warming below 2 degrees Celsius—that promise is not consistent with support for the Keystone pipeline,” said Leehi Yona, a leading environmental activist in Canada and the U.S.

Many of Trudeau’s other environmental promises are clouded in uncertainty and could easily still be shaped by pressure from Obama and other international players. While Trudeau has vowed to invest close to $6 billion into green infrastructure over the next four years, he has avoided setting official emissions goals, instead delegating that task to provincial leaders.

Canada will also likely present its emissions targets at the U.N.-led climate conference in Paris this month. It remains to be seen if officials will hold to Harper’s promise of reaching 30% below 2005 emissions by 2030. That target was one of the least ambitious of the G7 nations, and environmentalists have called on Trudeau to revise it.

But Trudeau could still face pressure from lobby groups to lessen bureaucratic restraints on Canada’s oil industry. “In an effort to maintain the economic competitiveness of Canada’s industry, we encourage governments across the country to take a balanced public policy approach to their fiscal policies,” Tim McMillan, the CEO of the Canadian Association of Petroleum Producers, whose members control the vast majority of oil production in Canada, said in a statement earlier this year. “Policies that make the regulatory system inefficient, that constrain our ability to move our resources to new markets, or that deter capital investment, will only add to the challenges.”

Regardless of what Obama does, Trudeau will likely be forced to offer greater clarity on his environmental policies at the upcoming climate conference and the various other international meetings he’s scheduled to attend.

Kathryn Harrison, a political science professor at the University of British Columbia, said that “if [Obama] has been pressuring Canada to take stronger actions to reduce its greenhouse gas emissions, particularly from the tar sands, as a condition for approval, there could be pressure for greater clarity on that issue from the new Liberal government.” 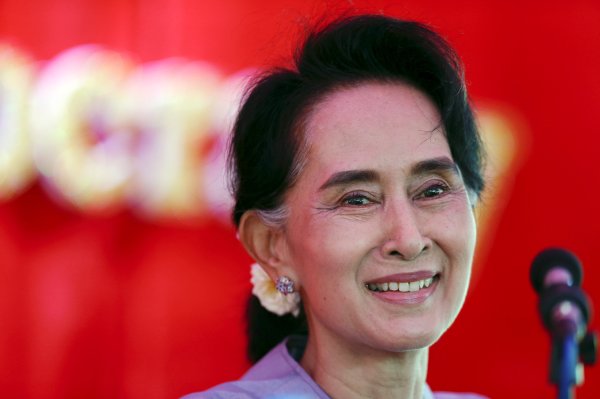 Aung San Suu Kyi Says She'll Be 'Above the President' if Her Party Wins Burma's Elections
Next Up: Editor's Pick