A gay couple in Pennsylvania is drawing attention to a little-known legal limbo facing some same-sex couples in the wake of national legalization of gay marriage: they can’t get married because they’re technically father and son.

Nino Esposito and Roland “Drew” Bosee first met on Easter Sunday in 1970 and have been partners roughly ever since, the Pittsburgh Post-Gazette reports. They live in western Pennsylvania, where for many years Esposito was a teacher and Bosee worked as a freelance and technical writer, but where same-sex marriage has been legal only since 2014. In 2012, two years before that court decision legalized gay marriage in the state (and before a Supreme Court decision legalized it nationwide), Esposito, now 78, legally adopted Bosee, who is 10 years younger. It was a common strategy at the time for same-sex couples in Pennsylvannia to provide some of the legal protections of marriage, such as hospital visitation and inheritance rights.

‘[Adoption] gave us the most legitimate thing available to us,” Bosee told CNN of the adoption.

Esposito and Bosee applied earlier this year for an annulment of the adoption so they could get married. A local judge said he was “sensitive to the situation,” but cited Pennsylvania adoption law in denying their request. The couple’s lawyers have appealed the case to the Supreme Court of Pennsylvania. Pennsylvania Democratic Sen. Bob Casey rallied to their side this week, sending a letter to U.S. Attorney General Loretta Lynch requesting that the Department of Justice consider lending its support to their case.

“Our clients were deprived of their rights twice,” Andrew Gross, a lawyer for Esposito and Bosee, told the Post-Gazette. “They did the only thing they could do to become a family, and now they are getting hit a second time.” 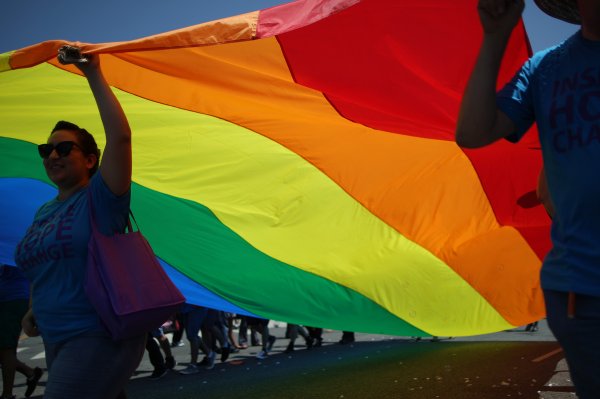 Watch LGBT Firefighters Share Their Stories in FDNY's 'It Gets Better' Video
Next Up: Editor's Pick