How Poop Can Be Worth $9.5 Billion

Power plant: There's more going on here than you might think
Getty Images
By Jeffrey Kluger

Let’s get two nasty numbers out of the way first (and don’t say you haven’t wondered about these at least once): The human race produces about 640 billion lbs. (290 billion kg) of feces per year, and about 3.5 billion gal. (1.98 billion liters) of urine. Divide by 7 billion if you’d like to get your own annual contribution to this heaping helping of yuck.

From the moment human beings shambled out of the state of nature, the problem has always been just what to do about all that biological refuse. In the developed world, the answer is familiar: Flush it away as fast as possible and try not to think about it. In the developing world—especially in the parts where up to 2.4 billion people have no access to advanced sanitation and 1 billion have no facilities of any kind—things are a lot more difficult. Worse than difficult, the problem is dangerous, since human waste fouls water supplies, spreads infection and wrecks overall quality of life.

Now, according to a smart study by a United Nations think tank on water, environment and health, there may be a simple—and profitable—solution: turn human waste from a disposal problem to an energy resource.

Human feces ranges from 55% to 75% water. Much of the 25% to 45% that remains consists of gaseous methane—produced by bacterial breakdown—and a solid residue which, if dried and concentrated, has an energy content similar to that of coal. Unlike coal, of course, this is a fuel that hardly needs to be sought or mined, but like coal, it can have a lot of value.

The U.N. report estimates that globally, human waste converted to fuel could have a value of about $9.5 billion. The amount of waste produced just by the 1 billion people with no sanitation facilities could be worth up to $376 million in methane production alone—enough to power 10 to 18 million households. The compressed, solid residue would produce the equivalent of up to 8.5 million tons of charcoal for industrial use.

“When it comes to creating misery and poverty, human waste mismanagement has few rivals” said Zafar Adeel, the director of the U.N. group, in a statement accompanying the report. “If we can demonstrate a simple, cost-effective new approach…we can enhance development, protect the environment and help reduce sanitation problems causing one-tenth of all world illnesses.”

The energy-generating part of this equation involves solid waste only, but all that urine humans produce every year has a role too. According to a Swedish study, every 1,000 liters (264 gal.) of urine contains 600 g (.66 lbs) apiece of phosphorous and potassium and 900 g (1 lb.) of sulphur. Combining both solid and liquid waste, a single human produces 4.5 kg (9.9 lbs) of nitrogen per year, according to the World Health Organization. All of this could be recycled as nutrients for crops, increasing yields and helping to bring down both poverty and hunger.

The problem with any think tank study is how you implement it—and when the implementation is as complex, cumbersome and just plain messy as it would be in this case, that’s especially so. But a pilot project is being launched in Uganda, with the help of seed money from Canada (which is home to the think tank), the U.N. and the Ugandan Ministry of Water and Environment. The program will involve decentralized collection and processing in towns with poor or no sanitation, as well centralized collection in institutional settings—beginning with schools and prisons. A similar, if smaller, pilot study is being run in Kenya.

Scaling up from two small trials to a global recycling system would, of course, be no easy matter. But it was not easy to link the world by air or Internet or electric grid either—and even now, the coverage is not uniform. Still, if there’s one truism about all organisms, it’s that they must both consume fuel and excrete waste. The problem will be here as long as we’re here—so we’ve got all the time we need to figure it out. 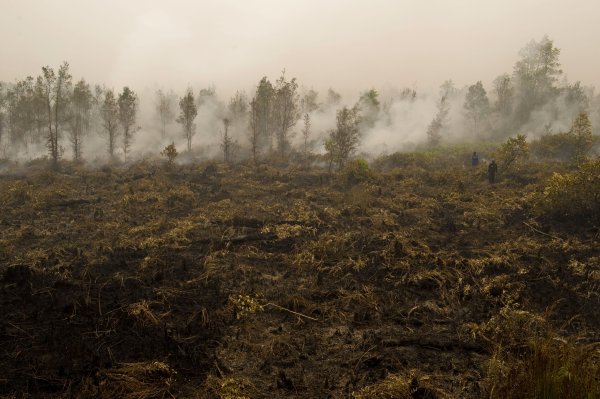 How to Solve Southeast Asia's Choking Haze
Next Up: Editor's Pick