Merkel's Shift on Refugees Alienates Her Allies on the Left

Chancellor Angela Merkel calls them “transit zones.” Her Justice Minister Heiko Mass has called them “mass holding camps in no man’s land.” But whatever the political term of art, it won’t be pretty when Germany starts building border facilities to process the thousands of asylum seekers streaming into the country every day.

The idea for these places, which would basically function as deportation centers along the southern frontier with Austria, received Merkel’s grudging approval late on Sunday, when her political party released a new “position paper” on how to deal with this year’s influx of refugees. It marked a clear reversal of Merkel’s open-door policy toward asylum seekers. But more worryingly for the political establishment, it showed the strain on Merkel’s ability to placate the dueling forces inside her own coalition. With contradictory demands coming from her two main partners, Merkel’s knack for finding compromises appears to have found its limits.

From the right, the Chancellor’s stance on migration is hemmed in by her conservative Christian Social Union allies in Bavaria, the predominantly Catholic province where more than half a million Muslim asylum seekers have entered Germany this year. The head of this region, Horst Seehofer, has been demanding the creation of transit zones for months, in part to reassure his right-wing base that he will not allow Bavaria to be inundated with foreigners.

From the left, Merkel faces resistance from the Social Democratic Party’s Sigmar Gabriel, her vice chancellor and coalition partner. Throughout the worst migration crisis Europe has seen since World War II, Gabriel has stood behind Merkel’s welcoming attitude toward refugees. But he appears to have drawn the line at the creation of transit zones, which he has termed “detention centers.”

On Sunday, this ruling trio met at the chancellery in Berlin to seek common ground, and apparently didn’t find enough of it to stand on. After two hours, Gabriel left the talks with a sour expression on his face. Merkel and Seehofer meanwhile stayed on for eight more hours and released their six-page position paper that night.

Its plan to “organize and steer immigration” set out a few key policies. The centers would function like revolving doors; migrants from “safe countries of origin” – especially from the Balkans and other parts of Eastern Europe – would be kept at these border facilities pending “accelerated” deportation. By contrast, migrants coming from war-torn countries like Syria, Iraq or Afghanistan would still be able to get temporary housing deeper inside Germany while their applications for asylum get a closer look.

But the paper was also short on details. Crucially, it did not spell out whether the transit zones would have fences and gates to keep the migrants confined inside. It also left open the question of whether Germany would start walling itself off with razor-wire fences, as the right-wing government in Hungary started doing in August to keep the migrants out.

But Merkel’s position paper does foresee a two-year suspension of one of the most generous and humane aspects of German asylum policy. Under a provision that took effect on Aug. 1, refugees who arrived in Germany were able to apply to have their families join them even before they were granted asylum. Women and children from Syria were thus given a chance to avoid the perilous migration route to Europe, because as long as their husband or father made it to Germany first, he could secure safe and legal passage for them to follow. But under the plan that Merkel and Seehofer hashed out on Sunday, this “family reunification” initiative will be frozen until 2017.

It was another concession to the conservative Bavarian leader, and it likely isn’t the last one Merkel will have to make. The Chancellor’s hold on power in Germany has relied throughout her decade in office on her ability to co-opt and balance the positions of both the left and the right, thus allowing her to dominate the political landscape as a pragmatic centrist for all occasions.

“That’s part of why she’s so successful,” says Hans Kundnani, a political expert at the German Marshall Fund, a think tank in Berlin. “But on this issue of migration she’s moved really far to the left, in a much more controversial way than on previous things she’s done.”

That doesn’t mean her defining strategy will change. She will still need to cede ground and offer concessions to the opposing camps within her coalition. But at this stage in the migration crisis, there may be a political need to placate conservatives like Seehofer. Her open-arms approach toward the migrants had led to a spike in support for far-right fringe parties, as well as an alarming rise in xenophobic violence and attacks against asylum seekers in Germany. On Oct. 17, one of Merkel’s political allies, Henriette Reker, was stabbed in the neck while campaigning for the mayor’s seat in the city of Cologne. Police later said the attack was motivated by Reker’s devotion to the acceptance and integration of refugees.

For Merkel it was a rude awakening, proving how dangerous the mood of xenophobia in Germany had become. And her priority then turned to appeasing the voices on the right, which resulted in Sunday’s position paper and its vision for transit zones along the border. But while it calmed the mutiny emerging in Bavaria, it won’t be the end of her need for appeasement.

On Thursday, she and Seehofer will meet again with Gabriel, their liberal partner in the governing coalition, who is still firmly opposed to transit zones anywhere in Germany. As the discussions proceed, he will be sure to pull them back toward the left as much as he can manage. But Merkel can afford to stand her ground. Though her ratings have dipped amid the migrant crisis, her position as the ruling arbiter of German politics is not under immediate threat, mostly because there is no viable alternative for the post of Chancellor. But the debate over mass migration has already shown how a crisis can throw her off balance, leaving the Chancellor to swing between two political forces that she cannot fully control. 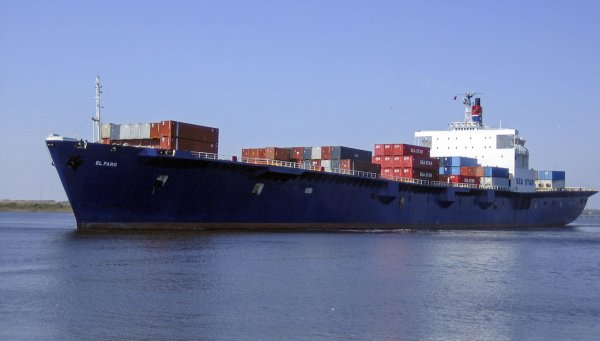 El Faro Ship Found Near Bahamas
Next Up: Editor's Pick