Republican presidential candidate Ben Carson speaks during a news conference before a campaign event at Colorado Christian University in Lakewood, Colo., on Oct. 29, 2015.
Justin Sullivan—Getty Images
Ideas
By Kareem Abdul-Jabbar
Abdul-Jabbar is a six-time NBA champion and league Most Valuable Player. He is the author of the new book, Writings on the Wall.

Now that Ben Carson is the leading GOP candidate, the doctor is under a lot more pressure, not just as a candidate, but as a representative of African Americans. The lifelong burden of a minority is that they feel as if everything they do or say reflects not just on their own character, but also on how the rest of their group will be judged by the ruling majority. Jon Stewart satirized this truth on The Daily Show with “Is This Good for the Jews?” in which he assessed how news about prominent Jewish people reflected on all Jews.

Would President Ben Carson be good for African Americans?

Ben Carson is good for African Americans in that he is a deeply moral man who has done much good as a physician and now wants to upsize his good-doing on a national and global scale. His success story is the stuff the American Dream is made of and is motivation for others to follow his path. His accomplishments as a medical doctor are admirable and serve as an inspiration for young black men and women seeking a career in science. His measured, even groggy demeanor, commands attention and respect. Had he decided to dedicate his post-retirement life to promoting STEM education across the country, he would have been a model for the American ideal that anything is possible.

However, he chose to run for president of the U.S., and that’s bad for African-Americans. His repressive, muddled and pious policies and opinions often run against our Constitution—but his questionable proposals will likely, thankfully, be doomed by his lack of political expertise. His presidency would be marked by even worse gridlock while he wastes his time trying to impose his narrow and sometimes ill-informed morality on the other 319 million people in the nation. And it would definitely not be good for African Americans to have a president who flounders helplessly in office because it would perpetuate the stereotype that blacks can’t be effective CEOs, quarterbacks and leaders.

Although Carson is a celebrated physician, he has expressed several opinions that are contrary to scientific evidence and therefore call into question his logic—a quality crucial in a president. His claim that sexual orientation is a choice is remarkably unscientific. He has argued that “a lot of people” in prison change their sexual orientation. As many people have pointed out, sexual behavior is not the same as orientation. Plus, studies indicate the most significant causes of sexual orientation are genetics and in utero hormonal exposure. According to the American Psychological Association, “most people experience little or no sense of choice about their sexual orientation.” For a physician to ignore the preponderance of scientific proof in favor of his own religious beliefs is dangerous because is it justifies enacting laws that restrict human and civil rights. Carson has since apologized, but we should never forget that pseudo-science was used to prove blacks were physically and mentally inferior to whites and to justify slavery.

But Carson’s opposition to science doesn’t stop there. Global climate change is a major issue affecting the future of human life. International conferences take place in order to determine how quickly this process is proceeding, and studies show that 97% of actively publishing climate scientists conclude human activity has caused climate warming. Yet Carson says he has not seen “overwhelming science” that proves climate change is manmade. This head-in-the-sand approach could prove disastrous to the country’s survival, never mind the Earth’s. This comes on the heel of his refutation of the Big Bang theory based on the second law of thermodynamics; physicists responded by explaining that Carson misunderstood and misstated the actual law. His judgment as a man of science was also compromised last February when he blamed an outbreak of measles on illegal immigrants from South and Central America; the Centers for Disease Control concluded that the strains were genetically similar to those found in the U.S., Europe, and Asia. Further, there was no way of knowing whether it came from an immigrant, legal or not, or from Americans traveling abroad or even just from here.

Again, when an elected leader ignores testimony from 97% of the world’s experts, renowned physicists and the CDC, we have to question his decision-making abilities. Carson perpetuates the black stereotype of someone who’s too confused or frightened by all that complicated science so he or she ignores it, clinging to superstitions or religion. Obviously, white politicians have been making the same buffoonish claims, but they aren’t representative of a minority struggling to achieve equality.

The president often advocates for the kind of educational system we should have. President George W. Bush’s No Child Left Behind had a devastating effect on education that we are now changing. President Barack Obama recently called for less testing in school because the focus on mandated testing has taken away from classroom instruction. Education reform is especially important for the black community because of the overwhelming evidence that black children are not receiving the same quality of education as white students. A 2014 U.S. Education Department survey concluded that students of color in public schools are punished more and receive less access to experienced teachers than white students. The same study shows this leads to lower academic performance for minorities, putting them at greater risk of dropping out of school. At the same time, education is under attack by people wishing to rewrite history. McGraw-Hill textbooks in Texas referred to slaves as “workers” who immigrated to the U.S. rather than were kidnapped. Ben Carson, who defers to his religious faith in the face of scientific evidence, does not seem like a strong advocate for quality education.

It’s also alarming to hear Carson refer to black Americans as unable to think for themselves because they disagree with him. “I think black Americans over the course of this next year,” Carson said, “will begin to see that they have been manipulated very, very largely.” This statement implies that blacks have been manipulated but not whites because they don’t have the same intellectual capacity to resist.

A Carson presidency would also be a direct attack on the health of African-Americans: he equated the Affordable Care Act to a form of slavery. Between 2013 and 2014, Obamacare reduced the number of uninsured blacks from 24.1 percent to 16.1 percent. It also funded community health centers, where African Americans make up nearly 25% of the patients, to the tune of $11 billion. This is a matter of life and death, not political posturing. Black Americans have a life expectancy about five years shorter than white Americans. If you’re black, you have a higher chance of dying than whites in eight of the top 10 causes of death. Black deaths from cancer are much higher than white deaths. Blacks are twice as likely to be diagnosed with diabetes than whites. Yet Carson’s own health-care plan, which he proposed last week, is vague and lacks substance. According to the Washington Post, “it would neither expand access to health care nor improve quality, nor save a whole lot of money.” But it would get rid of the Affordable Care Act.

Actually, poverty is the form of slavery that is most insidious in America, and it is perpetuated by institutional racism, which Ben Carson seems to deny exists. African Americans are particularly hit hard by poverty: 38.3% of black children lived in poverty in 2013. Yet, Carson insists that the black community must resist government handouts that have made us a welfare state. He praises blacks in history who have pulled themselves up by their own bootstraps to make something of themselves despite harsh circumstances. He further states: “We must not allow their sacrifice to become meaningless by allowing ‘do-gooders’ to replace the chains of overt racism with the new chains of dependency, low expectations, victimhood and misdirected anger.” What makes this rallying cry so disingenuous is the fact that his mother received government assistance while he was growing up, which he acknowledges was crucial. The government gave him free eyeglasses as a child, which improved his grades. In his book, Gifted Hands, he says, “By the time I reached ninth grade, mother had made such strides that she received nothing but food stamps. She couldn’t have provided for us and kept up the house without that subsidy.”

In 2014, a United Nations Human Rights Council questioned U.S. delegates about what they claimed were continuing racial discrimination against African-Americans and other minorities in jobs, housing, education, health care, and the criminal justice system. U.N. experts concluded that segregation in the U.S. “was nowadays much worse than it was in the 1970s” and that “some 39 million African Americans are particularly affected by structural racial discrimination in the United States.” If Carson refuses to acknowledge institutional racism, then it is unlikely he will do much to alleviate the problem.

Founding Father Thomas Paine, in support of the American Revolution, said, “These are the times that try men’s souls.” The trying times haven’t changed because America by its nature is always in the midst of social revolution. We are always striving to do better for our people by fulfilling the promise of a democratic Eden here and now. How we participate in that revolution determines who we really are. These are the times when all Americans need a champion willing to fight hard to fix the problems that affect people from all walks of life, not deny or ignore them. Ben Carson is not that champion.

Minority of One, a documentary on Abdul-Jabbar’s life and career, premieres Nov. 3 on HBO Sports. 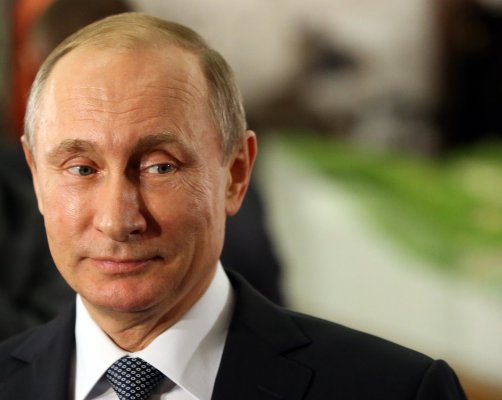 Putin Tops Forbes' Most Powerful People List For Third Year in a Row
Next Up: Editor's Pick