A Fiery Jeb Bush Promises to Win 'This Damn Thing'

Down but not out, onetime Republican frontrunner Jeb Bush pulled out all the stops Monday to show donors and supporters that he has both a plan and the potential to still win the 2106 Republican nomination.

A raucous crowd of die-hard supporters in Tampa, Fla, gave the daytime event the feel of an election night victory party, equipped with hand painted and printed “Jeb!” signs. Reading off a teleprompter with a fire and self-confidence that was mostly absent last week at the third Republican debate, Bush declared that he would be the victor, by running as the person he is, and pointing out the flaws of his rivals. “We’re gonna win this damn thing,” Bush said, matter-of-factly.

The event was the official kick off the “Jeb Can Fix It” tour—a slogan meant to highlight his successful record in government, not his so-far fumbling record as a presidential candidate. “After seven years of incompetence, corruption and gridlock in Washington, we need a president who can fix it. I can fix it,” Bush declared.

If the past debates were to be any predictor of future success, Bush’s claim that he would win should have had the audience in stitches. A budget crunch and staff shakeup, uneven-to-downright-awful performances on stage, and a temperament unsuited to the frustration roiling in the GOP’s gut have all made far longer odds for the wager at the heart of the Bush campaign—that voters will set aside more dynamic candidates for a tried and true hand.

When Bush decided to run for president nearly a year ago, he was always envisioning a long fight to the nomination, but never imagined the level of frustration within the GOP base at the party’s establishment that has boosted the outsider candidates. “Shock and awe” and the “joyful tortoise” gave way to the joyless “grinder” fighting to avert a legendary collapse.

For weeks, Bush had blindly promised to improve as a candidate, while saying he couldn’t change whom he was to run an “angry” campaign for the White House to tap into voter concerns. In the most passionate speech of his campaign, not least because of the friendly crowd, Bush finally offered a glimpse at how he hopes to square the contradiction: turning his inner nerd into campaign strength.

“I have gotten a lot of advice lately myself. . . more than enough,” he quipped, on the same day that he released a 700-page eBook of collected emails from his time in Tallahassee. “Some is stylistic. Take off the suit coat. Ditch the glasses. Get rid of the purple striped tie.” Turning to the audience behind him, Bush pointed to the sartorial liability, joking, “Man, I like that tie.”

Being authentically Jeb—the man, not the brand Jeb!—may be the only path left for Bush, who is feeling pressure from the steady rise of his former protégé Marco Rubio.

On Saturday in Iowa, Bush told reporters once again he knew he had to improve, saying he felt himself having a bad night on stage at the CNBC debate last week.

“I have enough humility to know that I’ve gotta get better,” he said. “But also, I’m a really competitive guy, and I do have a record that on that stage is unmatched and I’m going to share it with passion and conviction and I think I’m gonna win.”

But he responded to a reporters’ question about how he would improve his debate performance with a shrug. “I don’t know,” he said, adding. “How do you think I can do it.”

Humbled after losing a sparring match with Rubio over his voting record and Donald Trump over his legacy, Bush has reframed his criticism of his some of his chief rivals, avoiding using their name but making the attack more biting.

“The answer isn’t sending someone from one side of the capital city to the other,” Bush said of the senators. “The solution won’t be found in someone who has never demonstrated the capacity to implement conservative ideas.And you can’t just tell Congress… ‘You’re Fired’… and go to a commercial break.”

“The challenges we face as a nation are too great to roll the dice on another presidential experiment,” he said, implicitly comparing them to Obama. 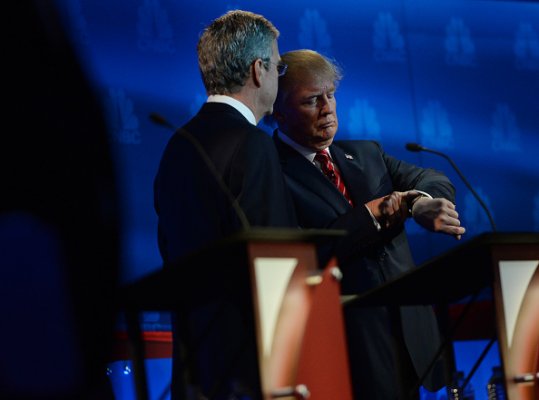 How Jeb Bush Lost the Republican Debate
Next Up: Editor's Pick