What to Know About the E. Coli Outbreak That's Linked to Chipotle

An outbreak of E. coli in Oregon and Washington state has been potentially linked to Chipotle, and the company has closed all of its restaurants in the two states.

This isn’t the first time Chipotle has been hit with a foodborne outbreak, nor is it the first time that a major food company has had its food contaminated. Here’s what you should know about the most recent case.

Who is sick?
As of Friday there were three people in the Portland area who had been sickened from E. coli, and 19 people in Western Washington, the Associated Press reports. More than 15 of these people had eaten at a Chipotle in the last few weeks, and eight of the sick people had to be hospitalized. In an interview with the AP, Marisa D’Angeli, a medical epidemiologist with the Washington State Department of Health, said more cases are expected as people with symptoms hear about the outbreak and go to their doctor.

What exactly is E. coli?
E coli is a bacteria that lives in the intestines of people and animals. The types of E. coli that can cause symptoms like diarrhea can be spread through contaminated water or food or via contact with animals or people. There are several strains of the bacteria, and shiga toxin-producing strains of E. coli, called STECs, are the usual culprits of food-related E. coli infections, according to the U.S. Centers for Disease Control and Prevention (CDC). Around 265,000 STEC infections happen every year in the U.S., according to CDC estimates, though the actual number of cases reported to the CDC is much lower:

Not all strains will make you sick, but the type that do can cause diarrhea, urinary tract infections, respiratory problems, fever, vomiting and other issues.

The investigation has not confirmed which foods at Chipotle might be the culprit, but samples are being tested by authorities. The strain has also not been reported.

How does it spread?
When people get sick from E. coli, it’s usually because they get very tiny amounts of human or animal feces in their mouth. “Unfortunately, this happens more often than we would like to think about,” the CDC says.

There are certain foods that more commonly carry the bacteria, like soft cheeses, raw milk and unpasteurized apple cider. Eating undercooked meat could cause an infection, or eating contaminated food like lettuce or other items that could have been contaminated. The CDC also notes that some people have been infected by contaminated water, like by drinking lake water.

Who should be checked in this outbreak?
Health authorities are asking people in the area who have symptoms of the illness to consult a physician, especially if they visited a Chipotle recently. “Anyone who thinks they may have become ill from eating at a Chipotle restaurant in the past three weeks should consult their healthcare provider,” said Washington State epidemiologist Dr. Scott Lindquist in a statement. “The elderly and very young children are more likely to become severely ill from this kind of E. coli infection.”

What has Chipotle done?
Chipotle has closed its restaurants in both states, and it will reopen those 43 spots when the investigation declares it safe.

Chipotle spokesman Chris Arnold said that safety is a top concern for the company. “We immediately closed all of our restaurants in the area out of an abundance of caution, even though the vast majority of these restaurants have no reported problems,” he said. The company is not closing other restaurants because there has been no indication as of now that the issue is in other states.

Has this happened before to Chipotle?
It has. Though E. coli has not been linked to the restaurant before, cases of norovirus and Salmonella have been.

How can restaurants become contaminated?
There are so many different ways that foodborne pathogens can spread in the food system. Meat can be contaminated during slaughter, fruits and veggies could be washed with contaminated water, and unwashed hands or surfaces can aid in the spread at various points in the process. If investigators can trace the bacteria to a particular food, that can be helpful in better understanding how the bacteria was introduced.

How can I prevent infection?
As always, wash your hands thoroughly—especially after using the bathroom, changing diapers, coming in contact with animals and handling food, the CDC says. Make sure your meat is thoroughly cooked, avoid raw milk, try not to swallow water when swimming in lakes or pools, and make sure food preparation areas are very clean. 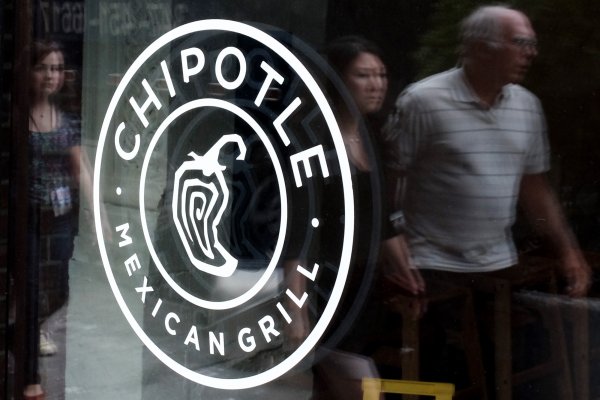 Chipotle Closes Dozens of Stores After E. Coli Scare
Next Up: Editor's Pick