I Am Proof That Bathrooms Should Be Gender-Free

Nicole Maines was the plaintiff in a 2014 Maine Supreme Judicial Court case that found that her school violated Maine’s Human Rights Act by prohibiting her from using the schools’ student restrooms.

My name is Nicole, and I am an 18-year-old girl who knows all too well what it’s like to be singled out for being perceived as being too different. I am transgender. I knew that I was for as long as I can remember. Unfortunately, efforts like those currently taking place in Houston to roll back protections for transgender people and others are also not new to me. I hope I can help convince people there that being transgender is not a big deal, and that we are just average people trying to go to school, work and live good lives.

If voters in Houston decide Tuesday to repeal the Houston Equal Rights Ordinance, which would protect LGBT people from discrimination, it would place transgender youth at risk in schools and communities. I know from first-hand experience that separating transgender students from their peers can cause many to leave school, hide who they are, or even do the unthinkable. In a recent national survey, almost half of young transgender people said they have seriously thought about taking their lives, and one quarter report having made a suicide attempt. All we want to do is go to school as our real selves.

Before the fifth grade, my classmates were able to accept and be friends with me, not bothered by the differences that seemed so important to the adults around us. We were on our way to showing the adults in our community that there’s nothing wrong with being transgender, and that it’s perfectly normal. As a first-year college student, I am still taking steps to show people just that—that it’s perfectly normal.

Read a piece from Nicole’s father, Wayne Maines: My Transgender Daughter Deserves the Same Rights as Your Children

For a number of years at my public elementary school in rural Maine, I was treated like all the other girls in school. That changed in September 2007 when a male classmate, set on a path by his grandfather, followed me into the girls’ restroom. The end result was that I had to use the school’s staff bathroom—just me, no one else. I was isolated and effectively classified as an “other.” My school and community began to acknowledge me as being different and treated me like a second-class citizen.

What followed was five years of legal battles. Adults who were afraid of transgender people like me proposed bills that would have forced me back into the boy’s restroom. I experienced self doubt, anxiety, anger, disappointment and confusion. How could my school and the adults who were supposed to protect me abandon me?

During this battle my family moved more than two hours from where my father works. I missed him more than I could ever describe. We only saw him on weekends because he had to work there to support us. In our new town, I didn’t tell anyone that I was transgender. At school, I used the girl’s bathroom everyday, and during gym and track I used the girl’s locker room with no fanfare. There was only one problem: I felt like I wasn’t being completely myself. I didn’t feel like I was lying, but I felt awful and it was hard to not be able to share such a big part of my life. I felt like I was only giving them part of Nicole.

My parents taught me to be proud of myself and to be proud of our state and our country. Some days that has been hard. But on Jan. 30, 2014, in a 5-1 decision, the Maine Supreme Judicial Court ruled in the case of Doe v. Clenchy that Regional School Unit 26 violated Maine’s Human Rights Act by singling me out for exclusion from the restroom just because I am transgender. That day, my family and friends cried happy tears, and I felt that I was being acknowledged as an equal to my classmates and to the rest of my community, and no longer second class. I hope Houston gives young people like me the opportunity to be themselves. 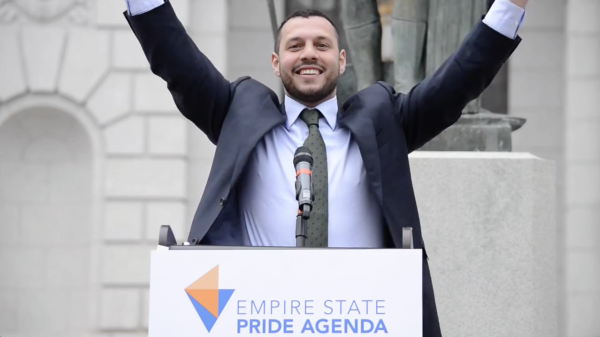 I Did Conversion Therapy for 5 Years—Now I'm Working to End It
Next Up: Editor's Pick