Bodies of Plane Crash Victims Flown Back to Russia

The bodies of 144 people who died when a Russian commercial airliner broke apart above Egypt’s Sinai Peninsula this weekend have been transported to the city of St. Petersburg, home to many of the flight’s victims.

The Metrojet Airbus A321-200 had been in the air only 23 minutes after taking off from the Egyptian resort town of Sharm el-Sheikh when it disintegrated, falling from 31,000 ft. and killing all 224 people on board the plane. The majority of them came from Russia, which observed a day of mourning for the victims on Sunday. The 144 bodies arrived in St. Petersburg on Monday, the BBC reports.

Investigators remain uncertain as to what caused the plane to break apart in midair. As news of the crash broke, militants belonging to the Islamic State of Iraq and Greater Syria (ISIS) took to social media to say that they had shot down the aircraft, a claim that Egyptian Prime Minister Sharif Ismail dismissed as impossible given the jihadist group’s known weaponry. Several major airlines have rerouted flights that pass over the Sinai Peninsula. 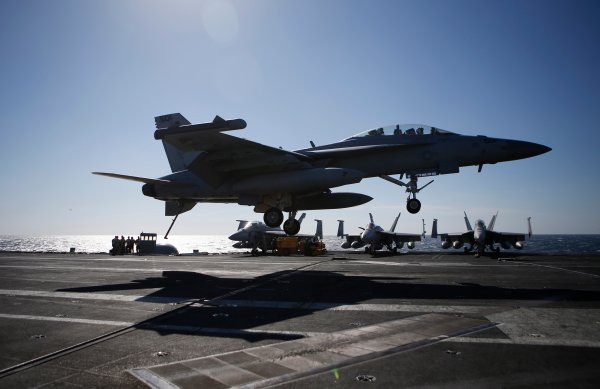 Russian Planes Provoke U.S. With Flyby of Aircraft Carrier
Next Up: Editor's Pick