Monday’s Google Doodle honors what would have been the 200th birthday of famed mathematician George Boole, whose research played a significant role in the 20th century’s digital revolution.

Boole work, commonly referred to as Boolean algebra, went on to influence binary systems used in electrical circuits and computers.

Boole’s talents didn’t lie solely with mathematics, however. Born in Lincolnshire in the U.K., Boole ended his formal education at 14 but still managed to teach himself poetry and a slew of languages. By the age of 20 he had even opened up his own school.

His scientific successes came later — he was the first pure mathematician to receive the Gold Medal for Mathematics by the Royal Society in 1844, only three years after his first publication on the subject.

He then became the first mathematics professor at Ireland’s University College Cork, then known as Queen’s College Cork, in 1849 — a position which he retained for the rest of his life. He wrote his most famous work, An Investigation of the Laws of Thought, there in 1854.

Boole fell ill with pneumonia and passed away in Cork in 1864 at the age of 49. He was survived by five daughters, many of whom ended up making significant contributions to maths and sciences themselves. 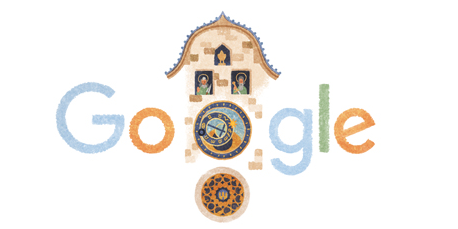 Google Doodle Honors the 605th Anniversary of the Prague Astronomical Clock
Next Up: Editor's Pick