These Guys Created a Real-Life Holodeck. Here's What It's Like to Use

The future of virtual reality is looking more promising than ever. Now a Utah-based startup is hoping a project dubbed The Void will bring the visions of Star Trek, The Matrix, and William Gibson’s Neuromancer one step closer to reality.

The beta test for the first Void Entertainment Center (VEC) will open in Pleasant Grove, Utah next summer. Founder and CEO Ken Bretschneider hopes this 65,000 square foot high-end destination will become “the IMAX of VR experiences.” If it works, Bretschneider plans on opening so-called VECs across the country.

Ever since Facebook acquired Oculus VR for $2 billion last year, investments have poured into the virtual reality (VR) market. But the focus of companies like Samsung (releasing the Gear VR Consumer Edition this month), HTC (launching the Vive headset with partner Valve next year), Sony (shipping PlayStation Morpheus in 2016), and Oculus (debuting Rift next year) has been on the home entertainment and gaming market. The Void, Bretschneider says, is aiming for an experience that can’t be replicated at home.

A player at The Void; What that player is seeing.
The Void

Even before selling his Internet security company DigiCert to TA Associates in 2012, Bretschneider had been designing a virtual reality theme park called Evermore. But it became clear that one concept within the Utah-based park—a real-life holodeck that could offer a wide array of virtual scenarios—had so much potential that it ended up taking the entire team’s focus. Bretschneider ultimately abandoned the park concept altogether, creating The Void instead.

The Void is a multiplayer VR experience that six to eight people can play together on a 60’-by-60’ stage. The stage has modular wall configurations that allows the experience to be customized. Software allows players to navigate these pods in a way that offers different types of exploration within simulated worlds. Multiple stages can be linked together either in the same VEC or, via high-speed broadband, to VECs around the country for larger multiplayer scenarios. James Jensen, founder and chief “visionary” officer of The Void, says there’s the potential to let gamers engage in Capture the Flag gameplay in a VR version of Epic Games’ Unreal Tournament PC game within The Void, for example.

Current playable scenarios range from a Halo-like sci-fi shooter experience called The Research Facility to the exploration of booby-trapped Mayan tombs in Dimension One. Jensen says every experience is being designed for multiplayer with a focus on cooperative gameplay—for now. “There are 10 dimensions that scientists can prove exist and zero dimension is the primal void in science theory that contains all dimensions, so that’s where the idea came from,” Jensen says. “We can explore infinite dimensions in The Void by taking people to places past, future, micro, macro, et cetera that they’ve never imagined.”

The Void blends theme park technology with concepts from magic shows: chief creative officer and co-founder Curtis Hickman previously designed illusions for David Copperfield and Chris Angel. The resulting “5D experience” blends special effects such as smells and heat with surround sound—all alongside a VR headset producing the visuals. Each experience is being designed for 30 minutes of gameplay.

Hickman describes another game being designed for The Void called Ghost vs. Hunters. The game’s various stages combine into a haunted house experience in which the hunters set traps to capture ghosts, while the ghosts try to haunt the hunters by touching them or scaring them by possessing items in the environment such as a nearby clock. Hickman says the game experience becomes a tug-of-war between the ghosts and hunters within an environment that’s much scarier than a traditional haunted attraction.

Before entering The Void through a themed portal, each player dons a custom-designed helmet, or Rig. This includes a head-mounted display that offers a 180-degree field of view and utilizes curved OLED screens. The system includes peripheral vision—something Bretschneider says is crucial for multiple players interacting in a confined space. The team has also designed a vest that includes a laptop and incorporates five haptic feedback motors that can replicate the feeling everything form being shot to being near an explosion. A pair of gloves also feature small haptic motors and allow users to touch or interact with virtual objects.

“The transition from the real world to The Void is natural because the equipment is your size and comfortable and once you done your rig, the VR room is identical to the real-world room you’ve geared up in,” Bretschneider says. “We want customers to forget about the equipment and enjoy the experience. It’s about coming back again and again just like you enjoy new movies at the IMAX.”

The cost for each 30-minute game will be $29 to $39 depending on the content and the location of the VEC. Some premium content, including Hollywood-licensed VR experiences, will cost more, just as a VEC in New York’s Times Square might charge more than a more rural location. Customers will book a virtual stage just like they choose a theater within a multiplex, but instead of a seat they’ll get a Rig to enter their selected game experience.

The alpha version of The Void is playable now in the company’s Utah office. That pod is only 30’-by-30’ because of space limitations and only supports two to three players at a time. But the first VEC will have eight pods when it opens next summer. 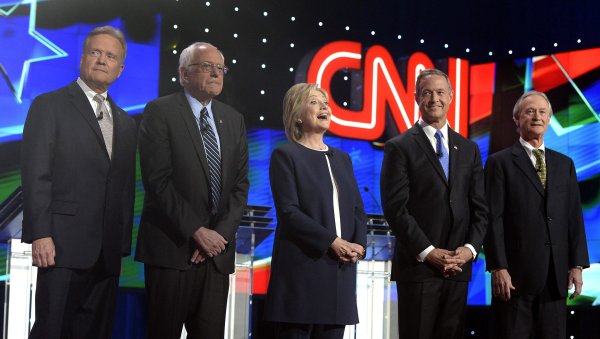 I Watched the Democratic Debate in Virtual Reality
Next Up: Editor's Pick