Why Russia Dismissed ISIS Claim Of Shooting Down Jet Over Egypt

The opportunity for self-promotion seemed too tempting for the jihadis to pass up. On Saturday afternoon, hours after a Russian airliner packed with tourists crashed over Egypt’s Sinai Peninsula, killing all 224 people on board, a group of militants affiliated with the terrorist group known as the Islamic State of Iraq and Syria (ISIS) claimed responsibility for the tragedy.

“The fighters of [ISIS] were able to down a Russian plane over Sinai province that was carrying over 220 Russian crusaders,” said a statement from the group circulated online. “They were all killed, thanks be to God,” the statement said, according to Reuters news agency.

The claim was almost certainly bogus. Before disappearing from the radar on Saturday morning, the airliner was flying at an altitude of around 30,000 feet, far out of reach of the shoulder-fired surface-to-air missiles that militant groups in that area are known to possess. “This information cannot be seen as credible,” Russian Transport Minister Maxim Sokolov said in denying the claims of responsibility.

Still, the reports of an ISIS connection to the catastrophe seemed to strike a nerve in Russia. Over the past month, the Russian air force has been conducting a bombing campaign over Syria, with some of its sorties targeting the group’s positions.

In response, the terrorist group declared a “holy war” against Russia and the U.S., which is carrying out a separate military campaign against ISIS in Iraq and, now, Syria. “Islamic youth everywhere, ignite jihad against the Russians and the Americans in their crusaders’ war against Muslims,” the group’s spokesman Abu Mohammad al-Adnani said in a statement on Oct. 13, according to Reuters.

Senior officials from the U.S. have also warned that the Russian airstrikes would make it a target for terrorists. “This will have consequences for Russia itself, which is rightly fearful of attacks,” U.S. Defense Secretary Ash Carter said on Oct. 8. “In coming days, the Russians will begin to suffer from casualties,” he said during a summit of the NATO alliance in Brussels.

Four days later, Russia’s Federal Security Service, better known as the FSB, claimed to have foiled a terrorist attack in Moscow that was allegedly linked to ISIS. After detaining an undisclosed number of suspects and seizing evidence in the Russian capital on Oct. 12, the FSB said that the suspects had recently returned to Moscow from Syria and were planning to plant a bomb in the city’s subway system.

All of these reports and warnings have stoked fears of terrorism in Russia in recent weeks. A nationwide survey conducted on Oct. 17-18 showed that 65% of Russians are concerned that they or their loved ones could become the victims of a terrorist attack, up from 58% a year ago.

And in justifying the air campaign in Syria, President Vladimir Putin has played on those fears by insisting that Russia must take the fight to the militants in Syria before they manage to stage attacks on Russian soil. “We must take pre-emptive action,” Putin said in an interview aired on Russian state TV on Oct. 12. “If we just stood by and let Syria get gobbled up, thousands of people running around there now with Kalashnikovs would end up on our territory.”

After the airliner crashed on Thursday, Russia could have used the claims of responsibility from the affiliates of ISIS to stir up more public support for its bombing raids in Syria. But judging by the reports in state media, the Kremlin has chosen against that approach. Its leading news network, Vesti, devoted only a short segment to the group’s claims on Thursday afternoon, and it treated them with great suspicion. “A portable surface-to-air missile launcher cannot reach a plane flying at more than 5,000 meters,” Semyon Bagdasarov, a Moscow-based expert on Middle Eastern affairs, told Vesti in an on-air interview.

The newscast then quickly moved on to the more likely causes of the accident, focusing especially on the fact that the airliner was 18 years old and that the carrier, Kogalymavia, had a record of technical mishaps. So whatever propaganda value the Kremlin might have squeezed from the militants’ claims of responsibility, it seems unwilling to encourage the belief that ISIS could kill more than 200 Russian citizens in a ground-to-air assault.

That version of events is not just highly dubious. It also would risk drawing a dangerous link between Russia’s air campaign in Syria and the death of more than 200 Russian civilians. And by spreading that narrative, the Kremlin could find itself blamed at home for drawing the terrorists’ fire. 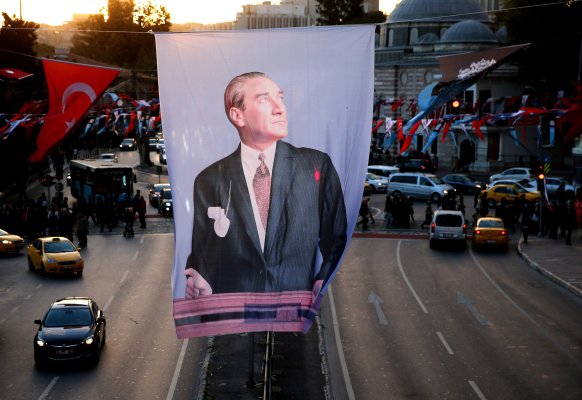 Turkey Set to Vote Amid Widening Political Divide
Next Up: Editor's Pick