In a move that may be an early signal of a new establishment front-runner in the crowded Republican presidential field, billionaire investor Paul Singer has pledged his support to Florida Senator Marco Rubio. Singer, the 71-year-old founder of hedge fund Elliott Associates, is not only one of the Republican party’s largest individual donors but is also regarded as especially influential among wealthy Republicans—the kind of campaign backer who can spur others to follow him. Among Singer’s chief causes are same-sex marriage and U.S. support for Israel.

Should the expected financial support for Rubio materialize, it could shore up what to date has been a relative weakness for his nomination bid. Though an average of recent polls shows Rubio trailing only outsider candidates Donald Trump and Ben Carson, third-quarter campaign fundraising numbers showed Rubio behind Carson, former Florida Gov. Jeb Bush, Texas Sen. Ted Cruz and Carly Fiorina in the money race. Right to Rise, the major Bush-supporting super PAC, has also out-raised the Rubio-supporting Conservative Solutions PAC.

Bush and New Jersey Gov. Chris Christie had both been seeking Singer’s backing for their campaigns. According to the New York Times, representatives from Bush’s campaign visited New York last week to try to sway Singer from endorsing Rubio. And as recently as Tuesday, Singer had been on the fence about whether to go with Rubio, according to Politico. He was reportedly skeptical of the size and quality of the senator’s campaign operation. But Rubio’s commanding performance in the CNBC debate on Wednesday night convinced him, Bloomberg reports.

Said Rubio on Friday of Singer’s endorsement, “It’s someone who is successful in raising money. When people donate to us they are buying into our agenda.” 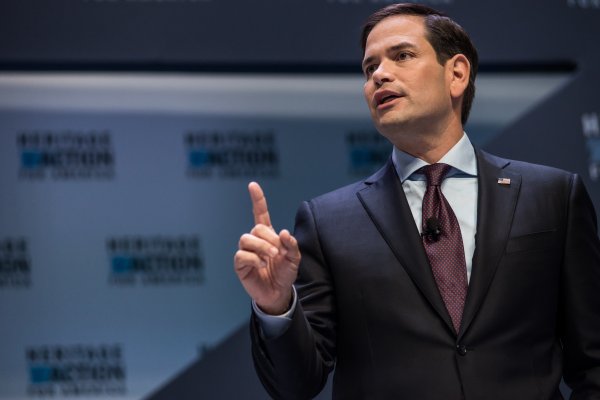