Bonfire societies parade through the streets of Lewes in Sussex, during the traditional Bonfire Night celebrations on Nov. 5, 2014.
Justin Tallis—AFP/Getty Images
By Dan Stewart

The sweet smell of woodsmoke combined with the crisp chill of an autumn night signals only one thing to most British people: Bonfire Night, or Guy Fawkes Night, when the nation remembers the 1605 attempt by a group of Catholic rebels to blow up Protestant King James I as he sat in Parliament. Fawkes, one of 13 conspirators against the crown, was caught beneath the House of Lords with dozens of barrels of gunpowder.

Across the nation on Nov. 5, fireworks will blossom and giant pyres will be set aflame with a life-sized “Guy” dummy seated on top. It may seem like a uniquely British phenomenon, but it wasn’t always so; in fact, Bonfire Night was once celebrated on the other side of the pond too.

Gunpowder Treason Day, as it was originally called, became a public holiday in the United Kingdom shortly after the foiled attempt on James’ life. The bill making it so, the “Observance of 5th November Act,” was introduced by Puritan lawmaker Edward Montagu in January 1606 and included a reference to the “malignant and devilish papists, Jesuits, and seminary priests” he believed responsible for the plot. Accordingly, Protestant churchmen delivered rabidly anti-Catholic speeches to mark the day. Not too many years later, when King Charles I married a Catholic princess, furious Protestants began burning effigies of the Pope on Nov. 5 — a practice that would continue for generations.

It was around the same time that British colonists landed at Plymouth Rock, just 15 years after the gunpowder plot took place. Bonfire Night was among the traditions early settlers brought with them. The ironically named “Pope’s Day” was regularly celebrated in Boston and New York well into the 18th century, and anti-Catholic revelers would destroy effigies not just of the Pope but also of the devil and other hated figures.

A song published in Boston in 1768 gives a flavor of the kind of rhetoric anti-Papists used in service of Pope’s Day, portraying the head of the Vatican as a horned, many-headed beast and encouraging Bostonians to “Burn Him to Nothing first and then / Plunge Him the Waves into”:

But then the American Revolution gave the colonists new symbols of hatred to focus their attentions on. In some communities Nov. 5 was reportedly renamed Benedict Arnold Day for the infamous war-hero-turned-traitor. The growing popularity of Halloween in the 19th century, especially in immigrant communities outside the northeast, is also thought to have contributed to the decline in Bonfire Night celebrations. Eventually, celebrations on Nov. 5 largely faded away in the United States.

In the United Kingdom, meanwhile, the holiday developed from a night to protest the Church of Rome into a night to indulge in more general misrule. By the end of the 18th century, children would play pranks on the evening before Nov. 5, which was known colloquially as “Mischief Night.” Increasing unrest around the date led Parliament to repeal the Observance of 5th of November Act in 1859 and — although anti-Papist sentiment on the night endured — it became more common to burn an effigy of Guy Fawkes himself, rather than of the Pope. (As it happens, the real Fawkes died not on a bonfire but by committing suicide moments before being hung, drawn and quartered.)

Not that the practice died out completely, of course. To this date the town of Lewes, Sussex, burns an effigy of Pope Paul V, who was head of the Catholic Church in 1605, on its Nov. 5 bonfire. The town also burns more contemporary villains as part of the revelries; Russian President Vladimir Putin, Syrian dictator Bashar al-Assad and British Prime Minister David Cameron have all been tossed on the pyre in recent years. 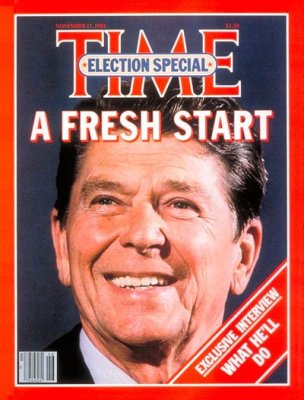 Eyewitness to a Landslide: Remembering Ronald Reagan's Historic Election
Next Up: Editor's Pick