Did CNBC Ask 'Gotcha' Questions at the Debate? You Decide

By Sam Frizell and Philip Elliott

It’s a tried-and-true tactic in politics: if you don’t like the question, attack the person asking it.

The Republican presidential candidates railed against their CNBC debate moderators on Wednesday night, accusing them of asking unfair questions about their records. The Republican National Committee released a statement condemning the debate while the stage lights were still on. By Friday, the RNC was moving to cut ties with its sibling, NBC, and trying to boot them as a host for a debate in early 2016.

“The questions that have been asked so far in this debate illustrate why the American people don’t trust the media,” said Texas Sen. Ted Cruz during the debate.

“It’s not a very nicely asked question the way you say that,” businessman Donald Trump snarked at another point.

“You just listed a litany of discredited attacks from Democrats and my political opponents and I’m not going to waste 60 seconds detailing them all,” Florida Sen. Marco Rubio of Florida responded when he was asked about his personal finances.

“Even in New Jersey what you’re doing is called rude,” said that state’s Governor, Chris Christie.

The attacks continued after the debate, as RNC chief Reince Priebus said in a letter Friday pulling the plug on NBC’s debate on Feb. 26 that the “questions were inaccurate or downright offensive.” The RNC says it needs assurances about debate terms and tone, although the Chairman was silent on what, exactly, he wants. Dissatisfied Republicans are meeting privately on Sunday to discuss future debates.

It was an example of a party deeply disliking the results of its third serious debate and, instead of confronting problems internally, hitting outward.

Cruz took the most direct aim at the debate moderators, comparing their questions to the apparently softball questions at the Democratic debate in Las Vegas earlier this month. “The contrast with the Democratic debate, where every fawning question from the media was, ‘Which of you is more handsome and why?'” Cruz said.

That line and others during the debate got applause from the audience. But a closer look at the debate questions show that the tone of questions between the Republican and Democratic debates is similar. After all, the first question CNN moderator Anderson Cooper asked Hillary Clinton was “Will you say or do anything to be president?”

Read More: Who Lost the Republican Debate? The Media

Below we’ve laid out some of the tough questions from both CNBC’s Republican debate this week, and the CNN Democratic debate on Oct. 13.

Here are the Republicans:

And here are the Democrats: 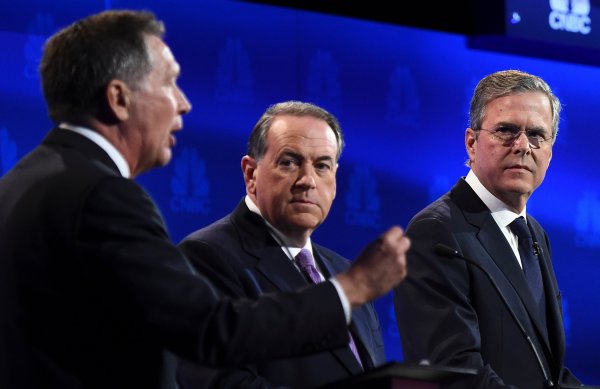 Watch the Republican Debate in Less Than 4 Minutes
Next Up: Editor's Pick