Hillary Clinton would take executive action as president to bar the federal government from asking about applicants’ criminal histories, according to a campaign aide, a move aimed at easing offenders’ reintegration into society.

Clinton’s executive action, which would also block federal contractors from inquiring about criminal history, would apply to the initial application phase and require that agencies that complete background checks to do so only later in the process.

The measure is known as “banning the box,” a reference to the box on job applications that asks for applicants’ criminal histories.

Clinton’s plan is not revolutionary: Nineteen states, including California, Colorado and Georgia have passed “ban the box” laws, according to the National Employment Law Project. Some large employers including Walmart and Starbucks have done so as well.

The Democratic frontrunner will make the announcement at a rally in Atlanta on Friday afternoon as part of her ongoing plans to reform the criminal justice system.

Clinton has put criminal justice reform at the center of her campaign, calling for an end to “the era of mass incarceration.” Her campaign also previewed a plan on Friday to end the drug sentencing disparity and ban racial profiling, and Clinton called earlier this spring for body cameras on police officers.

“Banning the box” is one part of Clinton’s “criminal justice reform agenda to be rolled out in the coming days, which will focus on policing, incarceration and reentry into society,” the aide said. 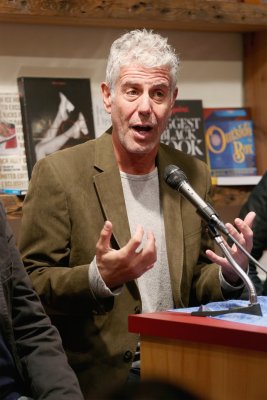 Anthony Bourdain Says 'Every Restaurant in America Would Shut Down' if Donald Trump Elected
Next Up: Editor's Pick