The documentary The Diplomat premieres on HBO on Monday, marking the signature achievement of the late diplomat Richard Holbrooke’s career: the signing of the Dayton Accords, which ended the war in Bosnia in 1995.

The Diplomat examines the legacy of its title subject, as viewed by his son, David, a filmmaker. Before the agreement, the ongoing war in Bosnia had been raging for years, despite cease-fires in Croatia and the first use of force by NATO to maintain a no-fly zone near Sarajevo. President Bill Clinton involved the U.S. military and, finally, in the middle of 1995, it seemed possible that peace might be negotiated. TIME noted that thanks to Holbrooke’s work as the U.S.’s chief negotiator on Bosnia, October 1995 brought the opening of “the most inviting window of opportunity for peace that Bosnia [had] seen in years.”

As the clock ticked on a limited-time cease-fire, Presidents Slobodan Milosevic of Serbia, Alija Izetbegovic of Bosnia and Herzegovina and Franjo Tudjman of Croatia came to a conference center at an Air Force base near Dayton, Ohio, chosen for its remoteness.

“Since August, the tightly wound Holbrooke has been at the center of the action,” TIME observed:

By the end of the month, Holbrooke’s “brilliant head knocking” had succeeded. The peace agreement was a major milestone in Clinton’s presidency and in Holbrooke’s professional life. It was also, TIME noted, proof that there was a place for the world power to use its influence for good.

Holbrooke knew the moment’s significance, according to Joe Klein, TIME political columnist, who appears in the HBO film. When the diplomat died in 2010, Klein wrote, “He was a pushy romantic with a grand sense of his nation’s purpose and power, a driving desire to use that power — peacefully, through diplomacy, to make a better world.” 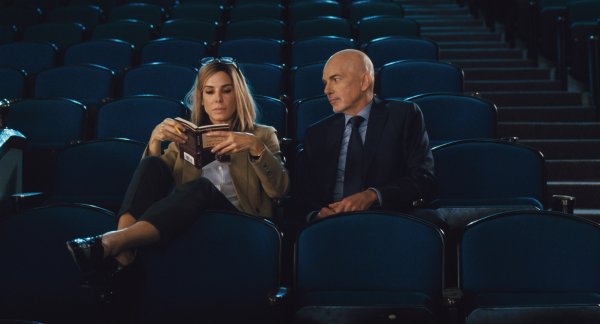 'Our Brand Is Crisis' Is Sandra Bullock's Worst Opening
Next Up: Editor's Pick