It was 216 days ago when NASA astronaut Scott Kelly strapped into a Soyuz rocket in the middle of the Kazakh desert to begin the single longest mission ever attempted by an American astronaut.

On Thursday, he finally achieved that goal, surpassing the previous record set by Spanish-American Astronaut Michael López-Alegría, who spent 215 days in space in 2007. (Soviet cosmonaut Valeri Polyakov holds the ultimate record of 437 continuous days dating from 1994-5.)

From now until Kelly returns to Earth on March 2, 2016, he and his five roommates will be whizzing around the planet 16 times a day in their rather hi-tech home, otherwise known as the International Space Station.

It’s been a big week of firsts for Kelly, who just a day before his longest mission record finished his first-ever spacewalk.

As part of a yearlong series of films about the mission, TIME’s A Year in Space Director Shaul Schwarz spoke with Kelly from NASA’s Johnson Space Center in Houston on Thursday about the spacewalk, breaking the record and missing home.

“There are certain senses and things that seem like, wow that was so, so long ago,” Kelly told TIME. Peering at the third rock from the sun through an open window on his spacecraft, Kelly said at times he feels an enormous disconnect with those back home.

“You definitely feel like you’re here and everyone else that’s important to you and everything that you care about and love is down there,” he said.

On Monday, TIME will release the fifth installment of A Year in Space. The series is available to view here. 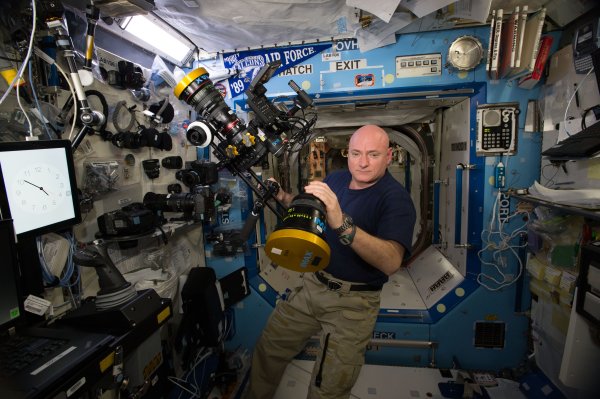 Why an Upcoming Spacewalk Will Be So Difficult
Next Up: Editor's Pick