Here's What Paul Ryan Can Learn From the Pope

During Paul Ryan’s inaugural speech as U.S. House Speaker Thursday, he said: “If you ever pray, pray for each other— Republicans for Democrats, Democrats for Republicans. And I don’t mean pray for a conversion. Pray for a deeper understanding, because—when you’re up here, you see it so clearly—wherever you come from, whatever you believe, we are all in the same boat.”

Ryan is very much in the same boat of his two immediate predecessors, Nancy Pelosi and John Boehner. All three are professed Catholics. And like Pelosi and Boehner, Ryan has his own set of difficulties with the Catholic Church on social policies. For Pelosi it was abortion rights, for Boehner it was immigration reform, and for Ryan it most likely will be the social safety net.

Ryan has already experienced this difficulty in recent years. In 2011 and 2012 as the chairman of the House Budget Committee, Ryan proposed significant cuts to programs that served the poor. The American Catholic bishops said that Ryan’s cuts were over the top and that his budget failed “a basic moral test.” Sister Simone Campbell and the Nuns on the Bus campaign took that message on the road and made the position of Catholics clear: You cannot balance the federal budget on the backs of the poor.

Ryan responded to the accusations by giving a speech at Georgetown, the nation’s oldest Catholic university, in which he defended his budget as well within the guidelines of the Church’s social doctrine: “Of course there can be differences among faithful Catholics on this.”

In response, Jesuit Father Thomas Reese said: “We’d give that speech an F. Catholics believe that problems should be dealt with at the lowest levels. But if families could take care of themselves, and the local government could, we wouldn’t have the crisis that we’re facing right now.”

After Ryan’s failed vice presidential bid and Pope Francis’s subsequent election five months later, he seemed to change his tone. Days before Christmas in 2013, BuzzFeed ran a profile of Ryan saying that Pope Francis had transformed the budget-slashing congressman into a missionary seeking to help the poor.

The jury’s still out. Ryan worked with liberal Senator Patty Murray to pass a just and bipartisan budget proposal in December 2013, but his 2014 budget was nearly as concerning as its 2011 and 2012 siblings, with tax breaks for the wealthy and cuts for programs that serve the poor.

Ryan said Thursday that he plans to “wipe the slate clean” and begin a new era of leadership for the broken House of Representatives. Perhaps this new era can be defined by the words Pope Francis spoke in front of the body last month: “If we want security, let us give security; if we want life, let us give life; if we want opportunities, let us provide opportunities​.” 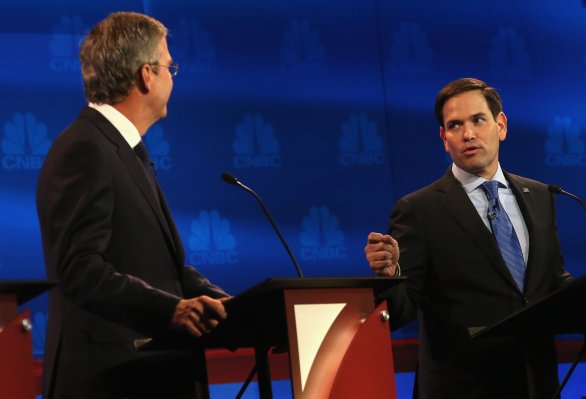 Why Leading in the Polls Doesn’t Matter
Next Up: Editor's Pick