Police groups in Los Angeles and Philadelphia say they will join officers in New York in boycotting the work of director Quentin Tarantino. The boycotts were announced in response to the Kill Bill director’s recent appearance at an anti-police brutality protest.

“Mr. Tarantino has made a good living through his films, projecting into society at large violence and respect for criminals; he it turns out also hates cops,” said Philadelphia police union president John McNesby in a release announcing the boycott.

In Los Angeles, Craig Lally, president of the Police Protective League said, “We fully support constructive dialogue about how police interact with citizens,” but added “there is no place for inflammatory rhetoric that makes police officers even bigger targets than we already are” in a statement, according to the New York Times.

Tarantino has been facing backlash from police since appearing at the New York rally and decrying some officers as “murderers” just days after a New York policeman was shot in the line of duty.

The group behind the rally, RiseUpOctober has said the police boycotts are merely an effort to scare protestors “back into silence.”

“It is aimed at sending a message, not just to Tarantino, but to anyone whose voice carries great weight in society,” said Carl Dix, one of the group’s organizers, according to the New York Times. 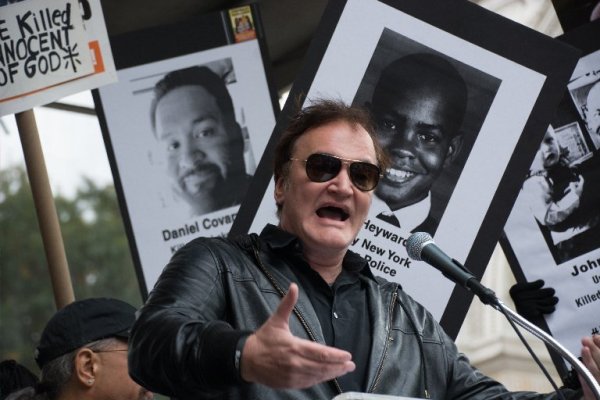 NYC Police Union Calls for Boycott of Quentin Tarantino
Next Up: Editor's Pick