Pedestrians and a man carrying baskets pass by a huge billboard extolling the virtues of China's "One Child Family" policy.
Peter Charlesworth—Getty Images
By Justin Worland

China announced Thursday that it would end its one-child policy after decades of trying to keep its population growth under control. The new policy, which would allow couples to have two children, aims to revitalize a rapidly aging workforce.

The world’s most populous nation isn’t the only country facing rapidly changing demographics, of course. For decades, developed countries have introduced a wide variety of policies to encourage parents to produce more children.

If a free cruise and a night at an Indonesian resort can’t get you in the mood to procreate, what can? Singapore’s government offered such a deal—called the “love boat”—with the important caveat that they expected couples to produce a child. Participating in fertility education and meeting with a sex counselor were among the resort activities couples had to attend.

The island nation hasn’t always been so eager to get people to breed. In fact, the population control policies may seem a bit like a game of red light/green light to a newcomer. A government slogan once urged parents to “Stop at Two” among other programs to slow population growth. Access to contraceptives and family planning programs were both increased.

But the campaign was too successful. A decline in the birth rate in the 1980s led to a rapid reversal in policy goals and a new program with the slogan “Have Three or More Children If You Can Afford It.” In addition to the love boat, the country gives parents in the country $8,000 in cash upon the birth of their first and second child and $10,000 for every child beyond that. The population growth rate increased from 1.5% in the 1970s to 2.8% in the 1990s, according to a government report.

If you’re a Russian fortunate enough to live in the city of Ulyanovsk producing a child may win you a car. The city council runs a “Give Birth to a Patriot” program that awards prizes to parents who give birth on Russia Day (June 12), according to a Guardian report. Workers in the region are also given time off for a “Day of Conception,” a whole nine months before Russia Day. Those who live elsewhere in Russia have to settle for cold hard cash when they birth a child; the government pays $13,000 to the parents of newborns, according to a Population Research Institute report.

But money apparently can’t buy Russia enough loving between its citizens. The population has shrunk by 700,000 annually in recent years. In addition to a low birth rate, the country has lost workers due to a high morality rate caused by alcoholism among other issues.

How’s this for a stimulus program? Japan unveiled a series of measures in March to address its aging population, including government-backed speed-dating sessions and new support for fathers to take paternity leave. The country has seen a steep decline in the fertility rate—the number of children the average woman would have over her lifetime—from 4.54 in 1947 to 1.43 in 2013.

It literally pays to be a parent in Germany. The country has encouraged population growth by spending billions of dollars each year on “family subsidies,” which provides parents who quit their jobs after the birth of a child with a stipend. The stipend program accounts for income earned before a child is born and maxes out at more than $25,000 per year. The program, which began in 2007, comes as young people make up a smaller share of the country’s population than any other country in the European Union. Just 13% are age 14 years old or younger, according to a Eurostat report.

Despite the initiative, birth rates in Germany have remained relatively stable in recent years. The influx of young migrants from Syria and elsewhere in the Middle East could help increase the population; some 800,000 are forecast to have arrived or sought asylum in Germany by the end of 2015. 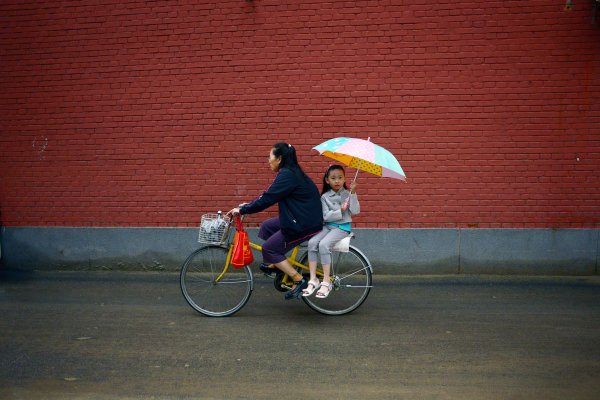 These Charts Show Why China Ended Its One-Child Policy
Next Up: Editor's Pick