Why Leading in the Polls Doesn’t Matter

It’s an interesting situation in the GOP field right now. Donald Trump and Ben Carson lead in the polls, but many have long predicted the nominee will be Jeb Bush or Marco Rubio. Commentators on Republican politics have gotten used to looking past the frontrunner to see who the real nominee might be. If Wednesday night’s Republican debate in Boulder, Colo., was any indication, that person is most likely Marco Rubio.

This isn’t without some precedent. In the 2012 election, Herman Cain sat atop the polls, but as a candidate who has never held political office, and thus never been seriously vetted, he collapsed when an avalanche of opposition research was unleashed upon him.(Disclosure: I worked on Cain’s U.S. Senate race when he ran in Georgia in 2004). Before that, Rudy Giuliani seemed like he would run away with the nomination in 2008, but as the election drew closer, voters started looking at who they believed could win the whole thing, and a mayor of a northeast city was not at the top of their list anymore.

Rubio had a great night overall, answering questions with ease and confidence, but his key moment was in an exchange with Jeb Bush, who has been referred to as his mentor. The moderator asked a question about Rubio’s missed Senate votes, and Bush jumped in, as a Rubio “constituent,” to say that he has a problem with that. The problem for Jeb was that Rubio clearly expected this attack. If Bush hoped to score points by knocking Rubio off his game, he failed. Rubio’s answer was tight, smart and took a shot at Bush for trying to raise his own poll numbers by attacking Rubio. Now many are reporting that Jeb Bush’s campaign is toast, while Rubio is smiling all over television.

What the debate showed more than anything else is that it’s still a long road to Iowa, and anything is possible. Poll numbers will show whether winning a debate will translate to voter support.

Markowicz has a Master’s Degree from NYU in Political Management and also worked on more than 10 political campaigns in four states. 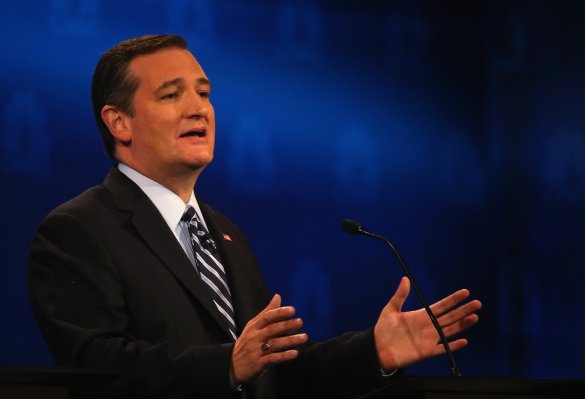 A Russian History Lesson From Ted Cruz
Next Up: Editor's Pick