It was the world’s most ambitious social-engineering project—and one of the most controversial. But on Oct. 29, after more than three decades, China finally ended its one-child family planning policy, allowing all Chinese couples to have two children, according to the official Xinhua News Agency.

China’s one-child policy may have prevented a desperately poor country from feeding up to 400 million extra mouths. Indeed, Communist officials credited their restrictive family planning with creating the conditions for the nation’s remarkable economic expansion. From producing around 6 children in the late 1960s, the average Chinese woman now bears around 1.5 offspring. If current trends continue, China’s population, now roughly 1.35 billion strong, will begin to decline by 2030.

But in recent years, the one-child policy has come under criticism, even at home, both for the human-rights abuses that were inflicted in its name (such as forced abortions) and for the unnatural way in which it has shaped China’s population. In other developing nations without such onerous family planning, the number of children in each family naturally tapered off as economies grew and educational standards increased. Nature, it turns out, doesn’t appreciate mucking about by socialist planners. One international population journal dubbed the one-child policy even more devastating to China than the 1966-76 Cultural Revolution or a manmade famine that killed millions from 1959-1961.

Today, China is a country of too many boys because families that traditionally preferred male offspring aborted female fetuses. Soon, there will not be enough brides to go around—and an extra 25 million males, “bare branches” on family trees. China is also a nation of too many old people with too few youngsters to care for the gray-haired generation. Given China’s lack of a social safety net, the elderly boom is more dangerous than it is in developed and better-equipped countries, like Japan.

In truth, the one-child policy was never quite as its name implies. Rural families, ethnic minorities and those whose first child was either a girl or handicapped—yes, female offspring were considered that undesirable—were often allowed to have more than one child. The result is an even more skewed demography. Just at the point when China needs bright young city types to power its economy to the next stage, the country’s working-age population has begun to shrink. That population is also unnaturally weighted with less educated rural kids.

Read More: Why the Reign of China’s Little Emperors May Not Yet Be Over

The danger signs of such massive social engineering were apparent years ago. Chinese demographers warned of the consequences. But so much of China’s communist narrative depended on trumpeting the success of the one-child policy. And local governments made lots of money levying fees for violating family-planning strictures. Even as the central government began loosening the policy in certain cities and under certain conditions, it was hard to let go completely.

Now, the deeply unpopular scheme has finally been dismantled. But in China’s big cities—just as in many of the world’s biggest metropolises—many people don’t want to have more than one child, even if Beijing is encouraging them to do so. Kids are expensive, and living costs are skyrocketing. Still, there are some who are excited by Thursday’s news. Wang Xiaobing, 37, and her husband, Xue Tao, are a middle-class Beijing couple with a 10-year-old daughter. Wang works for a state telecom company, and her husband is a civil servant. They now want a son to complete their family. “I think the government made the right decision,” says Wang, of the landmark dissolution of the one-child policy. “Couples should have the discretion to decide how many children they want.” That’s a very natural sentiment in a country finally freed of such an unnatural policy. 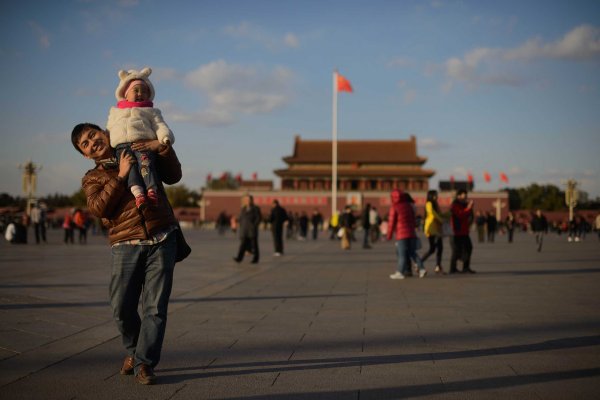 China Will End Its One-Child Policy
Next Up: Editor's Pick