Ted Cruz Goes After the Media in Republican Debate

Texas Sen. Ted Cruz issued a scathing critique of the media during the third Republican presidential debate Wednesday night, criticizing CNBC moderators for lobbing what he called biased questions at the candidates.

Cruz was asked about why he’s against the compromise budget bill poised to pass Congress and whether or not his opposition is proof that he is “not the kind of problem solver American voters want.” Cruz took the moment as an opportunity to harangue the panel and the direction in which the debate seemed to be headed.

“The questions that have been asked so far in this debate illustrate why the American people don’t trust the media,” Cruz said to cheers from the Colorado audience. “This is not a cage match.”

By that point in the debate, the moderators had asked Donald Trump if he was a “comic book candidate” and asked Former Florida Gov. Jeb Bush’s about his position at the fifth lectern, thanks to his slipping standing in the polls. They asked Florida Sen. Marco Rubio about his missed votes in Congress. Compared to the Democratic debate, Cruz said, the Republican presidential debate was being treated like a sideshow.

“How about talking about the substantive issues people care about?” he asked, rousing the crowd. “The contrast with the Democratic debate, where every fawning question from the media was, ‘which of you is more handsome and wise?'”

“Let me be clear, the men and women on this stage have more ideas, more experience, more common sense than every participant in the Democratic debate,” he added. 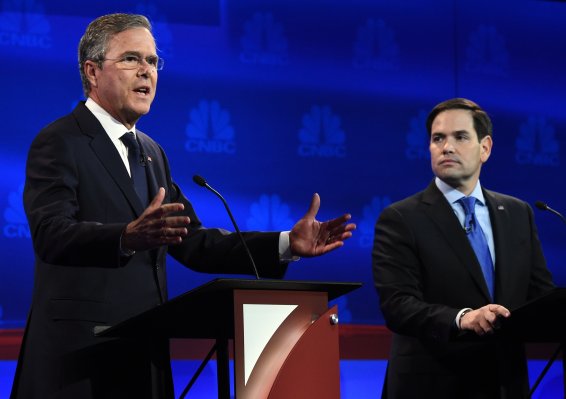 Here's How Marco Rubio Defended Missing Votes in the Senate
Next Up: Editor's Pick