Here's What Apps GOP Undercard Candidates Use Most

When it comes to smartphone apps, the four candidates at the Republican undercard debate stick to the tried and true.

Asked which three apps they use the most, the candidates offered pretty standard answers, with Louisiana Gov. Bobby Jindal even admitting that he still uses a BlackBerry, which only has Bricklayer as a game.

Here’s what they said.

“I still have a Blackberry in my pocket and I basically use it for scheduling—I use it to keep up with my wife and three kids at home,” said Jindal. “I may be the last American out there without an iPhone, my apologies.”

Former New York Gov. George Pataki noted that he used to have a driver when he was in the governor’s mansion, so he appreciates the Uber ride-sharing app. He called it “an example of what millennials are doing to change America for the better.”

South Carolina Sen. Lindsey Graham referred to the fact that he had to get a new phone after Republican frontrunner gave out his phone number at a rally so that supporters could call him to complain.

“The only reason I have an iPhone is because I gave my number to Donald Trump,” said Graham. “Donald has done more to upgrade my technology than my whole staff.”

He started to describe the apps he uses before the moderators jokingly cut him off. “Fox News … sorry about that CNBC, we’re in a Republican primary here.” 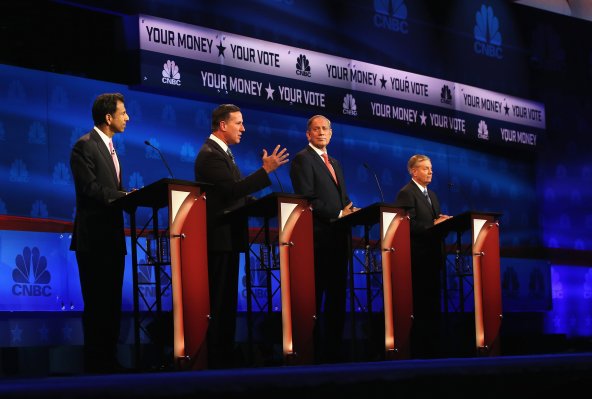