Here's Who Won the Internet During the Debate

Who you thought won the presidential debate Wednesday may depend on what was open on your laptop or smartphone while you watched.

There was no clear winner during the third Republican debate, with users of different platforms preferring different candidates, a reflection of the crowded 10-person debate stage as well as the different user bases.

• On Google, Florida Sen. Marco Rubio won, receiving the most search queries of any candidate. It was the first debate in which real estate mogul Donald Trump wasn’t the most-searched, as he dropped to third place, behind retired neurosurgeon Ben Carson.

• On Facebook, Texas Sen. Ted Cruz won, according to information provided by the social network. The Texas Senator’s criticism of CNBC for shying away from the “substantive issues that people care about” was the night’s most talked about event among Twitter and Facebook users.

• And on Twitter, the winner was Trump, who was the most-mentioned candidate with 22.2% of the debate conversation, followed by Cruz at 14.5 and Carson at 12.6%, according to information provided by the company.

Those results may not match the winners selected by debate pundits overnight or the American public in polls taken over the next few days, but they are indicators of who captured people’s attention.

“You see these one in a million conversations happen on Twitter everyday, especially around the political process,” said Sean Evins, one of the Twitter team’s managers. “It can be either challenging candidates to be better, be more transparent, be more open, talk about different issues or it can very well be fun and exciting.”

That’s especially true during the three Republican debates and one Democratic debate held so far, he added.

“Every one of these debates has been one of the most watched TV moments for that network ever, and it’s no surprise that we’ve seen the volume of conversation increase with every debate,” said Evins. “People are all around watching and actively replying and engaging on Twitter.”

That engagement can take individual moments from the debates and turn them viral, spreading to an audience that had otherwise tuned out the debate and amplifying their impact.

When Democratic candidate Bernie Sanders told Hillary Clinton during a debate that Americans were tired of hearing about her “damn emails,” the Internet went nuts. Users instantly posted Vines, gifs, photos and videos of that moment. It was then parodied on Saturday Night Live segment with comedian Larry David, leading to a second wave of sharing, which Sanders encouraged on the campaign trail.

Bridget Coyne, another manager at Twitter government and elections, says that candidates can gain points for playing along, “People really connected with that, people though that was funny and he played along with it too,” she said.

But candidates aren’t just using Twitter to have fun, says Coyne, they are using the platform to have seemingly intimate conversations that they often can’t have anywhere else.

“They’re coming to our platform to say in first-person how they feel about that real life event that’s affecting a lot of people,” said Coyne. “Sometimes those things are brought up during the debate, where the moderators say you said this on Twitter, and respond and iterate even further beyond the 140 characters.”

South Carolina Senator Lindsey Graham used the stage as an opportunity to mix one-liners, seemingly handcrafted for second screen users though really just a natural speaking style for him, with genuine introductions to an audience that may not have been familiar with him before his time on the undercard stage. He was rewarded by memes that extended his presence past the debate.

Those memes and viral posts that circulate during and after the debate aren’t just for laughs, as they can be an important tool in voters feeling out a candidate.

“Twitter users are people, I think that’s an important thing to consider. They’re looking to scrutinize these people as much as they would just to vote for them,” said Coyne. “Knowing what is real and what isn’t would happen with or with out Twitter, Twitter just gives them the opportunity to share that with the world.”

Read More: Read the Full Text of the CNBC Republican Debate in Boulder 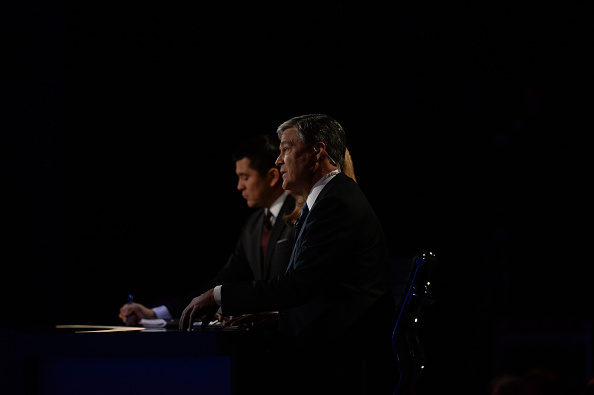 Who Lost the Republican Debate? The Media
Next Up: Editor's Pick