Here's How Marco Rubio Defended Missing Votes in the Senate

Florida Sen. Marco Rubio defended himself Wednesday against attacks that he’s missing too many votes in the Senate, dismissing local a newspaper editorial that called for his resignation as “evidence of the bias that exists in American media.”

“Back in 2004, one of my predecessors in the Senate, by the name of Bob Graham, a Democrat, ran for President, missing over 30% of his votes,” Rubio said during the third Republican presidential debate. “I don’t recall them calling for his resignation.”

“Later that year, in 2004, John Kerry ran for president, missing 60-70% of his votes,” he said. “The Sun Sentinel endorsed him. In 2008, Barack Obama missed 60% or 70% of his votes, and the same newspaper endorsed him again. So this is another example of the double standard that exists in this country between the mainstream media and the conservative media.”

That moment got a massive applause in the room.

The Sun Sentinal editorial board called on Rubio to resign from the Senate this week because he’s missed more votes than any other Senator during his presidential campaign. The editorial board noted that two other candidates (Kentucky Republican Sen. Paul Ryan and Vermont Democratic Sen. Bernie Sanders) have missed only 10 votes during their campaigns, but Rubio has missed 59, citing a tally from Politico. 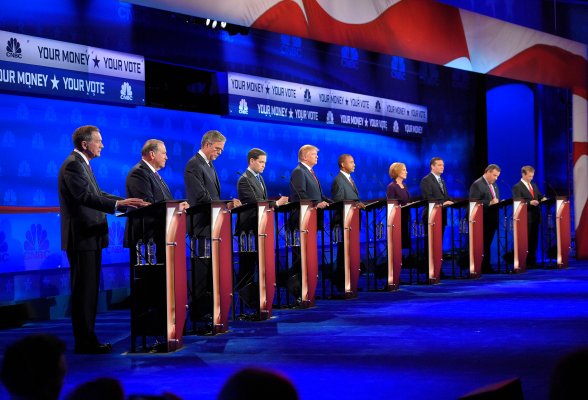 Watch the Republican Candidates Name Their Greatest Weaknesses
Next Up: Editor's Pick