How a Man's Unborn Twin Fathered His Child

Paternity tests are well known for producing some unexpected surprises, but the case involving a Washington man presents a new head-scratcher. After undergoing fertility treatments and having a son, the man and his partner were surprised when blood work showed that the boy couldn’t be related to the father. After two paternity tests showed the father only shared 10% of his child’s DNA, the parents feared the fertility clinic had inseminated the mother with another man’s sperm.

The couple hired a lawyer, who wrote in to Barry Starr’s Ask a Geneticist blog. Starr, director of outreach activities at Stanford University’s Department of Genetics, suggested that the couple get a 23andMe analysis done. The consumer-based genetic testing company provides more detailed relationship and ancestry type genetic data—using hundreds of thousands of markers on the genome—than the dozen or so markers that paternity tests cover. When the report arrived, Starr interpreted it for them and, he says, “it just leapt out at me: uncle. If it was a parent-child relationship, you would see 50% of the DNA related. If it is an uncle to a niece or nephew, it’s 25% related. This man and his son were 25% related.”

It turned out that the DNA in the man’s sperm, which was 90% his DNA and 10% that of his twin’s, was from his unborn fraternal twin. Vanishing twin syndrome, which refers to the condition in which one twin dies and is “absorbed” by the other, or by the mother or the placenta, occurs in anywhere from 20% to 30% of pregnancies with multiple babies. Apparently, the father had absorbed some of his twin’s cells in the womb, effectively becoming a blend, or chimera, of himself and his brother. The man’s previous child’s DNA matched his, so, as Starr says, “He is like dad and uncle to his kids.”

Such cases are exceedingly rare, but they do occur. Previous cases of chimeras revealed people with cells that contained DNA different from their own. Mothers retain some cells of their children, and a recent Danish study found that women who gave birth to boys retained cells with Y chromosomes. These can migrate throughout the body and have been found in the lungs, thyroid, muscle, blood, heart and even the brain of the mother.

But what makes this man’s case unusual is that some of the cells he obtained from his twin were apparently germline cells, which develop into eggs or sperm. Some cells outside of a developing fetus—in this case, the man’s fraternal twin (not identical, since their DNAs are different)—manage to get incorporated during the chaotic series of cell division and proliferation that occurs when an embryo starts to grow. It’s known that germ cells that go on to make egg and sperm are also quite mobile and do migrate: in this man’s case, apparently from his unborn twin to him. It’s not that an entirely new genome can be subsumed into another one, which would result in an excess of genetic material that is lethal. But some cells with differing DNA can be folded into a developing fetus and not be rejected because the fetus’ immune system isn’t developed enough to see it as foreign. Because the incorporation happened in utero, presumably early in development, the immune system was trained to see both the man’s DNA and his twin brother’s as self.

Dieter Egli, a stem cell scientist at Columbia University, notes that chimerism is what occurs with organ transplants, and, on a more sophisticated level, with the new stem cell-based treatments that researchers are exploring now. Egli is quite familiar with the unusual results of mixing DNA and the exquisite balance that’s required for proper human development; he is among the few who have used stem cells to clone human cells. The purpose isn’t to make mini-me’s, but to create a method for reliably producing cells from patients that can then be used to treat various diseases, like Alzheimer’s and spinal cord injury.

“This is certainly very unusual and interesting because it’s a germline chimerism,” he says. “What is interesting is to explore in what way this affects the person’s feeling of identity. These are questions that are more important as we start to use cell therapies and cell transplantations as well.”

It’s likely that more than just the man’s semen is a mix of his and his brother’s DNA. Starr says that the man’s skin shows different a striping pattern because his skin cells are a chimera of the two as well—his twin’s skin tone was slightly darker and therefore shows up more distinctly against his lighter skin. His other tissues and organs are also likely a mix of the two DNAs, making matching for his blood type or other organs a challenge.

Starr says that he and his colleagues plan to describe the case in more detail in a journal article; so far they have presented it at the International Symposium on Human Identification and at the American Society of Human Genetics. 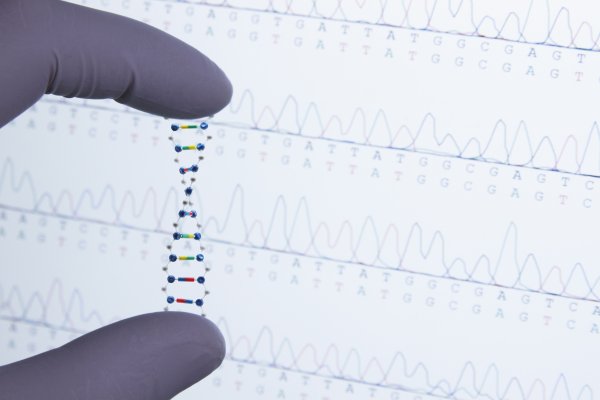