Halloween isn’t a holiday as much as it’s a massive costume competition. Think about it — when you roll up six kids deep to the house that gives out full-sized candy bars, if you haven’t brought your A-game, you’re going to end up the poor clown with a box of raisins.

Likewise, you need to put some effort into your Jack-o-Lanterns, too. Thankfully, there are lots of ways you can upgrade your gourd. Of course, if you want to go wild, you can turn your pumpkin into a fully-playable Tetris game (yes, someone has actually done that), but the only thing scary about that is how much work it takes.

Grabbing a kitchen knife and attacking your decoration like you’re Norman Bates is a great idea—if you’re going for an authentic “just chopped off my own finger” look. Instead, pro-level carvers cut to the chase by using power tools. When used correctly, they can be much safer than blades.

The Dremel Pumpkin Carving Kit even caters to this use case, coming with 10 carving templates and a high-speed cutting accessory to slice with speed and accuracy. The cordless rotary tool is great for grinding designs into the surface of your decoration, but if you dig deep, you may blow through its battery quicker than you think.

While Dremels are great at whittling away at a pumpkin, 3-D printing can add something special. Thingiverse, an online repository of downloadable 3-D printing files, has a great Halloween collection full of tombstones, monsters, and other spooky baubles. And if you don’t have a 3-D printer — and most people don’t — you can use one at UPS Store locations near you.

Light Up With LEDs

Though we’re far removed from the days when Jack-o-Lanterns were used to drive away evil spirits, they’re still very scary when paired with their original lighting source: candles. A fire hazard when left unattended, old-fashioned carved pumpkins might look more authentic, but in the age of LEDs, there’s no reason to leave danger to chance.

Ikea has a few inexpensive battery-powered lighting options for safer Halloween fun. The Stöpen LED tea light set offers an authentic-looking, flickering glow that might fool people into thinking you’ve got a real flame going. For more elaborate pumpkin displays, the Särdal LED lighting strand can be positioned in and around your decoration, throwing light while remaining cool to the touch.

To up your LED game a tick, try using a smart light instead. If you have a Philips Hue system — and a large enough pumpkin — the Hue Go portable smart light is web-connected, letting users turn it on, off, and change the color via an accompanying smartphone app. Pairing the bowl-shaped light with a motion sensor like WeMo Motion via the web interconnection service IFTTT can make your pumpkin come to light, and life, when a trick-or-treater steps onto your porch.

Put It In Motion

There’s nothing creepier than something that goes bump in the night, so try adding motion to your pumpkin to startle your guests right. While the ghoulish fiends at Make have a great tutorial on adding mechanical motion to a Jack-o-Lantern, you don’t need to master motors to add an element of mischief. Just drop an old remote-controlled car into the carved out pumpkin, wait until someone is approaching your door, and hit the accelerator. Inside the Jack-o-Lantern, the toy will spin its wheels, but it’s the visitor who will likely take off running.

Give It The Giggles

With the an abundance of Bluetooth speakers on the market, its easier than ever to slip some sound into your creepy creation. Small, portable speakers like the JBL Clip+ can fit in medium-sized pumpkins. Or for bigger sound (and a music-synced light show, to boot) the JBL Pulse 2 is a great choice — though at $200 it’s priced a lot higher than your typical Halloween decoration.

The next decision is what to stream through these devices. From Apple Music to Spotify, there are lots of spooky tracks to play beyond Thriller. But if you want to truly get people’s skin crawling, try some of the high-quality sounds in Ambiance, an app designed for relaxation. With more than 3,500 tracks, there’s something for everybody. For instance, you can bet demons like meditating to the “Depths of Hell” sound, the grim reaper must love “Tortured Soul,” and many a murderer likes to unwind to “Hallway of Fear.”

Make Your Own Fog Machine

This last pumpkin prank is more science than tech, but it’s a fun one nonetheless. To give your Jack-o-Lantern that extra air of creepiness, you can turn it into a fog machine simply by putting dry ice inside and adding water. And the ultra-cold solid chunks of carbon dioxide are very easy to get — most grocery stores will sell it to you. Just type “where to get dry ice” into Google and the search engine will return the nearest locations. Be sure to wait until just before the trick-or-treaters arrive before collecting it, though. The material is very unstable, and will start breaking down very quickly. And then, like Dracula, in a puff of smoke, it’s gone! 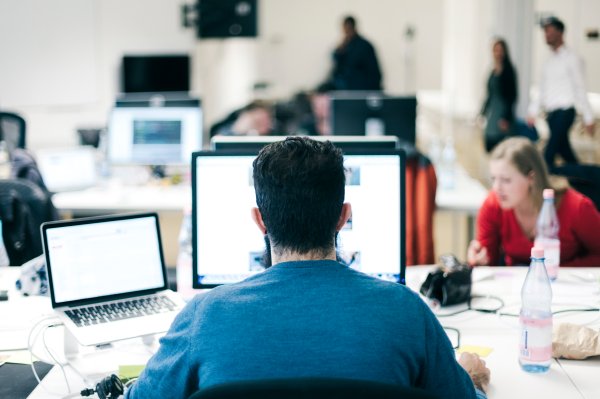 5 Secrets to Making Your Office Ultra-Productive
Next Up: Editor's Pick