A group of influential Republican Latino activists blasted Donald Trump on the eve of the third Republican presidential debate, while warning other Republicans against embracing his rhetoric and policies and suggesting they would withhold their support in a general election if they do.

Speaking to reporters Tuesday from a hotel ballroom one mile from where 14 Republicans will face-off Wednesday evening, the leaders said they are unanimously “over” Donald Trump, saying he is unelectable in their view because he can’t win over the Hispanic voters needed to win in swing states. The group stopped short of condemning others who have embraced Trump and similar policies, like Sen. Ted Cruz, to a similar fate—at least just yet.

“This group unanimously has decided that Donald Trump is not a candidate who we can support,” said Jerry Natividad, one of the organizers of the meeting, adding that the group will be before the December GOP debate in Las Vegas to evaluate the remaining candidates.

Behind closed doors, the group of about 20 Hispanic leaders discussed all the candidates running, said Mario Lopez, the president of the Hispanic Leadership Fund, in hopes of beginning to differentiate between those who can win the White House and those who are damaging the party with a vital group of voters.

But targeting other candidates has already fractured the ad-hoc coalition assembled in the past several weeks. The Koch-funded Libre Initiative was initially listed as a participant in the discussions, but pulled out amid media reports that the group might target Cruz, a darling of the conservative base.

Alfonso Aguilar, the ‎executive director of the American Principles Project’s Latino Partnership and another of the day-long meeting’s organizers, said even though the group didn’t target other candidates, they shouldn’t get too comfortable.

“It’s a shot across the bow to candidates who embrace Trump and who embrace those proposals that you should be worried, because we’re going to call you out,” he said. “This is how you build political leverage, so we can have an exchange. So if they want to talk to us, great, but at the end we want change, and if we don’t see it, they will hear from us.”

Cruz reached out to all the participants in the meeting in advance in an effort to assuage their concerns, but Aguilar said the group is looking to see a change in policy.

“If we don’t see course correction, then I think we may start naming other names,” he added.

After the party’s defeat in 2012, the Republican National Committee identified reaching out to Hispanic voters as a critical priority, warning that without supporting comprehensive immigration reform that the party could permanently alienate the increasingly powerful voting bloc.

“What we’re saying is, if you support ending birthright citizenship, if you’re for criticizing undocumented immigrants, and you’re buddying up to Trump, you will have a problem winning the general election,” Aguilar said, saying they will forcefully make that case to voters of all stripes who find themselves captivated by such rhetoric.

“I don’t believe he would have the support of anyone in this room and I don’t think he has a chance of winning the general election,” said Rev. Tony Suárez the Executive Vice President of the National Hispanic Christian Leadership Conference.

Rosario Marin, the former Treasurer of the United States, said the group is “gravely concerned” about the direction the Republican Party is moving with Latinos, suggesting candidates are taking them for granted in the ongoing primary—or worse. Trump’s rise, she added, has given Democrats “tremendous leverage” to paint all Republicans as anti-Hispanic.

“Foolishly, some candidates don’t think they need the Hispanic vote in the primary,” she said. “Heed our warning, don’t expect us to come to your side during the general election…If you are not with us now, we will not be with you then. You don’t need our vote now, you won’t it then You insult us now, we will be deaf to you then. You take us for granted now, we will not recognize you then. Maybe some candidates believe that we will forget, let me be crystal clear, we won’t.” 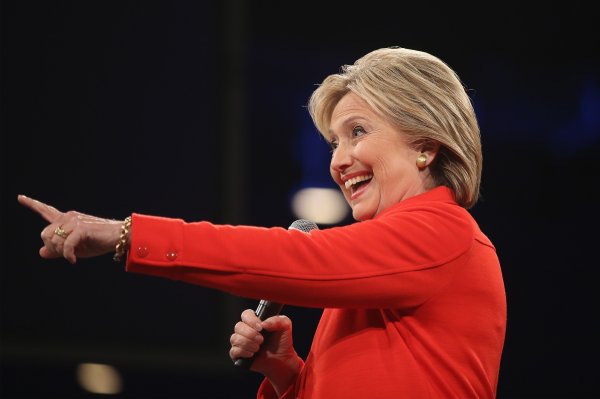