President Barack Obama thanked police officers on Tuesday for the work they’ve done to reduce the overall crime rate across the U.S., but said that work doesn’t reduce the need for a “robust debate” over fairness in law enforcement and the criminal justice system.

In the wake of last year’s police shootings in Ferguson and New York, communities of color haven’t shied away from expressing their discontent for the way they are treated under the law. At the same time, officers have gone on the defensive about the scrutiny they are under and the dangers they face while on the job. Speaking before the International Association of Chiefs of Police conference in Chicago, Obama did his best to meet both sides in the middle.

“I reject any narrative that seeks to divide police and communities they serve; that frames any discussion of public safety around ‘us’ and ‘them’–a narrative that too often gets served up to us by cable news seeking ratings, tweets seeking retweets, or political candidates seeking some attention,” President Obama. “Your work –your service – really has helped make America safer than it’s been in decades. That’s something of which every American should be proud.”

Yet, Obama said, that work shouldn’t keep either side of the debate speaking honestly about criminal justice and law enforcement issues. There’s been some movement on the topic, including among officers, as of late.

Last week a group of police chiefs, including Chicago Police Chief Garry McCarthy, came out in support of criminal justice reforms they said would improve their ability to crack down on crime.

The conversation on policing has revealed some differences in opinion within the Obama administration over the past couple of days, with FBI Director James Comey saying some police officers may be afraid to do their jobs with the public more apt to record their every move. “I spoke to officers privately in one big city precinct who described being surrounded by young people with mobile phone cameras held high, taunting them the moment they get out of their cars,” Comey said last week at the University of Chicago. “They told me, ‘We feel like we’re under siege and we don’t feel much like getting out of our cars.’ ”

The White House has rejected that assertion, saying the “available body of evidence does not support the notion that law enforcement officers around the country are shying away from doing their jobs.”

Obama tiptoed into a discussion on the issue of increased scrutiny on police by suggesting that the media does officers a disservice by focusing attention on instances of wrongdoing.

“Let’s face it, the media tends to focus on the sensational and the controversial and folks on both sides who say stuff that’s not designed to bring folks together,” he said. He added that society needs to “resist the impulse” to lurch from shock to scrutiny and “let investigations uncover facts to make sure stories of misconduct are not spread are not known.”

The statement came just hours after the Department of Justice announced it would be investigating an incident involving a school resource officer who can be seen throwing an African American girl to the ground in a now-viral video.

The past 12 months have provided for some tense moments between police and the communities they serve, but some of the most tragic events the nation has faced Obama said Tuesday have involved guns. According to White House officials, Obama met with the spouses and children of law enforcement officers who were killed in the line of duty and families of bystander victims of gun violence in Chicago before his speech.

The President used his remarks at Tuesday’s event to make a strong case for changes to the nation’s gun laws—an issue he’s had to revisit in the wake of the recent mass shooting on the campus of Umpqua Community College and the Emanuel church massacre in Charleston, South Carolina.

“I refuse to accept the notion that we couldn’t have prevented some of those murders, and suicides, and kept more families whole. If we had passed some common sense laws,” Obama said. “Fewer gun safety laws don’t mean more freedom, they mean more danger, more fallen officers. More Americans terrified that their families could be next.”

Obama also cited some statistics that compare the number of Americans killed by guns and terrorists since 9/11–during that time, he said, 400,000 Americans have been shot and killed by guns while fewer than 100 have been murdered by terrorists on U.S. soil. “400,000,” he said. “That’s like losing the entire population of Cleveland or Minneapolis over the past 14 years.”

The remarks were the President’s latest focusing on criminal justice reform, coming on the heels of a sit down with The Marshall Project last Thursday and an emotional visit to the center of the heroin epidemic. Criminal justice is one of the key issues Obama is hoping to tackle during his second term and one of the few that has been met with some bipartisan agreement among lawmakers. Obama said Tuesday he hoped the momentum around criminal justice reform remains strong and laid out his case for it, including restructuring sentencing guidelines for some non-violent drug crimes.

Obama has also used criminal justice and law enforcement issues as a channel into wider discussions on race. At Tuesday’s event, Obama reiterated statements he’s made previously calling on communities of color to give officers the benefit of the doubt, while also urging law enforcement to take seriously the cries of minorities who say they’re too often treated unfairly under the law. He also touted a newly released set of guidelines on how law enforcement agencies can implement suggestions from the 21st Century Police Task Force report.

“You know as well as I do the tensions in some communities…those sentiments don’t just come out of nowhere,” Obama said. “There’s a long history here in this country…but we all have a responsibility to do something about it.” 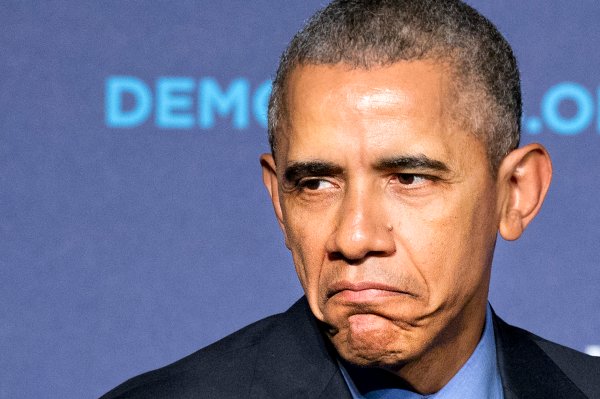