Jerusalem's Stabbings Are an Intimate Crime

It is reported that one of Leonardo Da Vinci’s principles was “learn how to see.” The best way to learn how to see something is to see it over and over.

Many people who have not visited Israel cannot see the situation in the country. Coming here, one learns. I have lived in Israel and been here scores of times, and yet being here now, as always, I am astonished anew at the smallness of scale. This is a country not of acres but of inches. Standing in Jerusalem, Jordan is a 20-minute drive away. Palestinian villages abut Jewish neighborhoods. It seems like you can almost touch Bethlehem from Gilo. The scale in Israel is that of a small city, not a major country.

There’s too much history and not enough geography—that’s the old lament. These days it’s deeply felt. The recent spate of stabbings reminds everyone both of the toxicity of the atmosphere and the closeness of the populations. Each day brings further incitement. Another stabbing, another attack. On Tuesday the news came in of the death of Richard Lakin, an American grandfather who was shot and stabbed in the recent Jerusalem bus attack. Several years ago he published a book called Teaching as an Act of Love. Can his murder possibly serve any cause but that of hate?

Stabbings are an intimate crime, a Jerusalem crime, if you will. They are not like drone strikes; to stab someone you look in their eyes, you smell them, you touch their clothing. And still, you aim to leak the lifeblood from their heart. At times it seems that Israelis and Palestinians are linked in a pas de deux dance of death, with no way out.

Traveling around the city, talking to cab drivers, workers, representatives of both the Palestinian and Israeli causes, certain themes emerge. Each side makes an appeal to history. And two narratives are at war—incompatible, conflicting and painful.

Israelis are convinced that the Palestinians simply do not accept the existence of the Jewish state. For example, the recent egregious declaration of the Palestinian Mufti of Jerusalem that the Temple Mount, a holy site for both Judaism and Islam, never existed and that a mosque stood on that site, despite the fact that Muhammed lived 500 years after the destruction of the second Temple, is symptomatic. The Israeli government is now adding cameras to the Temple in an attempt to prove that everything will stay status quo and both faiths will be able to worship there.

The Palestinians, meanwhile, are convinced that the Jews systematically marginalize them, often without cause. They feel a sense of permanent aggrievement. This was their home. The world is asking them to make accommodation with people whom many of them believe, on some level, to be thieves and usurpers. The echoes from the Arab world, rhetorically full if substantively empty, reinforce the idea that the Jews are evil.

When you have a cardiac exam, the doctor tells you that the measure of your health is the speed with which your heart recovers after exercise. By that measure Jerusalem is robust. The cafes are full, lovers stroll the streets, vendors—Jewish and Arab—hawk their wares in the malls and the market, guides corral tourist groups. Jerusalem has a healthy heart. Yet everyone here wonders: What is the future of two antagonistic populations who have no room to breathe, much less to divide?

Welcome to the Middle East, where tempers are short, memories are long, griefs are legion, and solutions exist only on paper. Yet this is also where both disappointment and salvation were born. “In the evening there is weeping but in the morning joy” (Psalm 30:5). We do not end in despair, rather it is a way station to redemption. Perhaps this morass will fertilize the soil and grow a garden. Pray for the peace of Jerusalem. 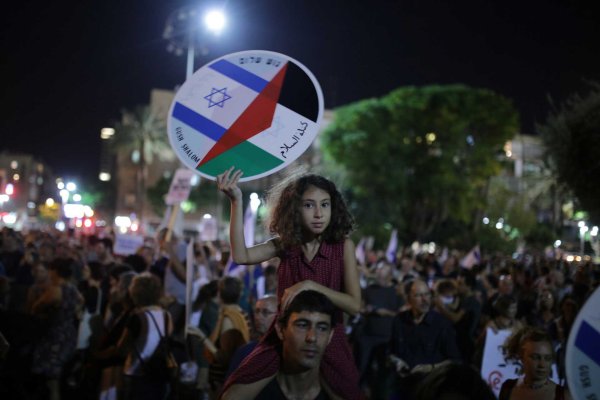 Uneasy Arab-Israeli Coexistence Threatened By Violence
Next Up: Editor's Pick