Motorola and Verizon on Tuesday unveiled their newest additions to the Droid lineup: The Android-powered Droid Turbo 2 and the Droid Maxx 2. Motorola claims the Droid Turbo 2 is shatterproof, meaning you can drop it face down on the ground without cracking its screen.

That extra screen protection comes by way of a technology Motorola calls “Shatter Shield.” The Droid Turbo 2 has a flexible 5.4-inch screen that absorbs shock and an extra protective layer that prevents the touchscreen from disabling after a bad drop. Motorola President Rick Osterloh demonstrated the feature during a press event Tuesday, dropping the phone face-down on a concrete block before showing off the lack of damage.

The Turbo 2 lasts for 48 hours on a single charge, according to Motorola. It supports fast-charging tech that allows users to get 13 hours of battery life after charging the phone for 15 minutes, the company claims. Meanwhile, the Maxx 2’s battery also lasts for 48 hours, but Motorola says users will get eight hours of battery life after re-charging for 15 minutes it versus 13 with the Turbo 2.

Both phones also have 21-megapixel main cameras and 5-megapixel front-facing cameras. To put that in perspective, the Samsung Galaxy S6 features a 16-megapixel camera, while the iPhone 6S comes with a 12-megapixel camera. On paper, this means the Droid Turbo 2 and Maxx 2 should capture better photos, but it’s impossible to tell for sure without testing the cameras side-by-side.

Motorola wants to make its new Droid phones just as customizable as its Moto X phones, as well. The company’s Moto Maker feature is now available for the Droid Maxx and Droid Turbo, meaning shoppers will be able to choose from various color combinations and textures for the phone’s back shell. If customers change their mind about their design, they can choose a new look for their Droid after two years.

The new devices look and feel similar to Motorola’s Moto X Pure, which debuted back in July. The overall design is the nearly the same, but the new Droids feel a bit lighter and less bulky. One key difference, however, is that the new Droids are exclusive to Verizon since it’s the carrier’s branding. Verizon has been working with companies such as Motorola and HTC to make Droid phones that run on Android since as far back as 2009.

The Droid Turbo 2 and Droid Maxx launch on Thursday, with the Turbo 2 launching at $624 full price ($20/month under Verizon’s payment plan) and the Maxx 2 costing $384 full price ($16/month under that plan). Customers trading in a phone with a cracked screen get a $300 credit towards the Turbo 2. 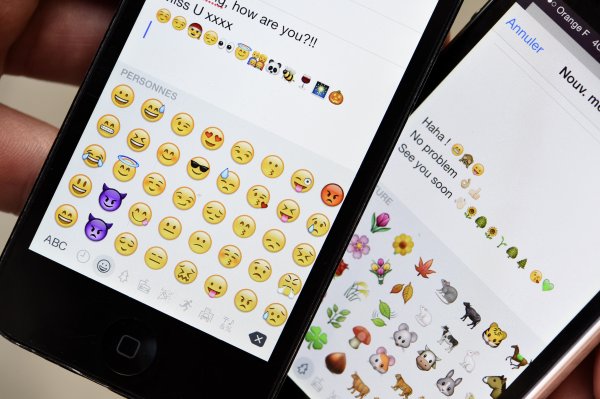 Your iPhone Just Got a Bunch of New Emoji
Next Up: Editor's Pick