Meet the Teen Spearheading Brazil's Protests Against its President

In August 2013, a 17-year-old Brazilian student called Kim Kataguiri attended a history class at his college in São Paulo state. Generally apolitical but interested in economics, his curiosity was sparked by a teacher who proposed that Brazil’s flagship welfare benefit to poor families was significantly responsible for the country’s then-flourishing economy.

“That just seemed wrong,” he explains in a telephone interview. “The family allowance might be necessary, but it has flaws and the main reasons for our high economic growth was the commodities boom and our relationship with China.”

Kataguiri, the son of a retired metal worker, was struck by how much his fellow students also accepted Brazil’s model of state capitalism as practiced by the Workers’ Party. So, instead of speaking up in class, he posted a video to YouTube to respond to his teacher. He expected it to stay within the university, but soon it went viral. “This was when I realized I could use the internet to defend free market values,” he said.

Since then, his rise to prominence has been swift. His videos have been viewed millions of times as the economy of YouTube-obsessed Brazil fell into recession and the country into political crisis. Kataguiri founded the Free Brazil Movement, a liberal group that espouses free-market values, and campaigns against President Dilma Rousseff.

The first goal of the movement is to seek the impeachment of Rousseff, whose ruling Workers’ Party he describes as the “the nemesis of freedom and democracy.” Kataguiri says she should personally pay the price for failing to prevent a massive corruption scheme at state oil giant Petrobras. Prosecutors say at least US$2 billion was paid in bribes, with millions alleged to have been funneled to her party. Dozens of politicians have also been accused of taking large bribes.

“Then,” he says, “we want to liberalize the state. We want less tax, less bureaucracy and the privatization of all public companies.” He admits these are ambitious goals in a country notorious for its complex legal system and bureaucracy.

His views have struck a chord with many Brazilians. On March 15, more than a million Brazilians attended anti-Rousseff protests. Kataguiri addressed 200,000 protesters in São Paulo the same day in what was the largest demonstration in the city in a generation.

Now 19, the grandson of Japanese immigrants has dropped out of his economics degree to dedicate himself to his political cause full time. He cites former U.S. President Ronald Reagan and former British Prime Ministers Winston Churchill and Margaret Thatcher as his heroes and, since his political awakening has studied the liberal economists Milton Friedman and Ludwig Von Mises. But while his videos are underpinned by economics, they are performed in an anarchic style — in one, he wears a ninja costume.

The Millennial generation and technology, he believes, can re-invigorate politics in Brazil, where graft and maladministration have contributed to widespread apathy.

“I emerged through the internet,” he says, “and I have a great hope that the internet can have a serious effect on the political world and can bring change. It can improve knowledge, participation and transparency in politics. Now, politics in Brazil looks very bad. Everyone steals. But I have hope that in 20 years things can be different. I have hope that our generation can change the ways things are done.”

Kataguiri says he has not yet decided if he wants to be a politician: “I am very young. I want to continue with the movement, with my videos, with my book. I need to work much more and develop intellectually before I can make such decisions,” he says, “I believe it is possible to be a politician and not be corrupt. But you need people who have a passion for ideas, not an ambition to be professional politicians.”

As Brazil has entered political and economic crisis, the toxicity of political discourse has increased and Kataguiri has become a controversial figure. In a surreal moment, he had a spat with Jean Wyllys, a leftwing federal deputy who himself came to prominence after winning the fifth series of Big Brother Brasil. Wyllys described him as “a political illiterate defending a microscopic state” and Kataguiri responded with a mocking video.

The forces in favor of the impeachment of Rousseff, whose personal approval rating in September was 10%, have not managed to top the protests in March but Kataguiri says he believes their movement still has momentum.

In reality, her future may depend on more conventional political machinations. A petition of impeachment is currently in the hands of Eduardo Cunha, the speaker of Brazil’s lower house of parliament, who has the power to accept or deny it.

Cunha, who has pledged to study the request carefully, is himself implicated in the Petrobras scandal, with leaks from federal prosecutors to the Brazilian press this month alleging he had US$5 million hidden in Swiss bank accounts.

It remains to be seen whether a new generation and new technology is enough to trump such an alliance of interests. 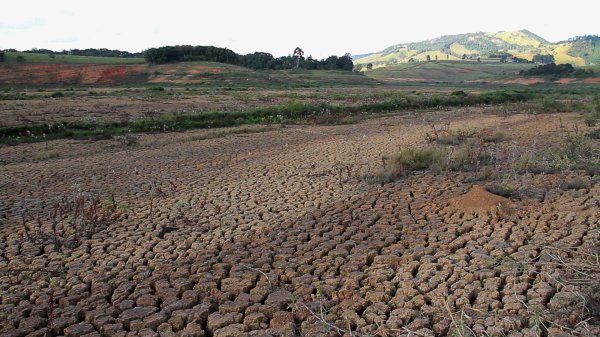 A Megacity Without Water: São Paulo's Drought
Next Up: Editor's Pick