Survivors Pick Up the Pieces After a 7.5-Magnitude Quake in Pakistan and Afghanistan

View of damages as a result of the strong earthquake that struck Peshawar, Pakistan, on Oct. 26, 2015
ppiimages/Demotix/Corbis
By Abdur Razzaq / Peshawar

More than 260 people in northeast Afghanistan and northern Pakistan died Monday when a major temblor centered on the remote Hindu Kush mountain range shook the region.

Tremors from the 7.5-magnitude quake were felt across South Asia, with the rupture shaking buildings in Kabul, Islamabad and New Delhi. Mild tremors were also felt as far afield as Bangladesh, at the eastern end of the Indian subcontinent.

In the Pakistani city of Peshawar, scores of men, women and children were rushed to the emergency room at the Lady Reading Hospital, the main health facility in the capital of the northwestern border province of Khyber Pakhtunkhwa.

“Those who were brought to the hospital [had suffered] from head injuries, bone fractures and soft tissue injuries,” Dr. Abdul Wahah, an assistant professor at the hospital, tells TIME. “Most of women and children were in severe psychological trauma and mental stress,” he adds.

Residents say many have been wounded as a result of crowded conditions of the affected neighborhoods. “Most of the houses in old Peshawar city are centuries old; the slums are narrow and overcrowded. People do not have the time or space to rush to areas where they can take shelter in earthquakes and other natural disasters,” says Ameen Khan, a 55 -year-old resident of Peshawar whose grandson injured his leg in the quake.

Robeena Bibi, whose house in Peshawar’s Hashtnagri area was knocked down by the shaking, injuring her 8-year-old daughter, says the disaster has left her family in dire financial straits. “Being very poor, now we are not in a position to repair our broken down house.”

In Afghanistan, at least 12 girls reportedly died in a stampede as students at a school in the northern province of Takhar rushed out of their classrooms. “The students rushed to escape the school building [when the quake occurred], triggering a stampede,” Takhar education department chief Enayat Naweed told news agency Agence France-Presse.

Across the region, telephone and electricity networks were disrupted when the ground shook on Monday afternoon.

At least 228 people were killed in Pakistan, 33 in Afghanistan and two in Indian-controlled Kashmir, according to figures compiled by the Associated Press. More than 1,000 people were reported to have been injured in Pakistan alone.

The numbers are expected to rise in coming days as rescue workers travel deeper into the Hindu Kush mountain region that was at the center of the earthquake.

Although powerful, Monday’s earthquake, at around 132 miles (212 km) below ground, was far deeper than the recent temblor that devastated Nepal in April, as well as the 2005 Kashmir earthquake that killed more than 80,000 people. The Nepal quake was just 5 miles (8 km) deep, while the Kashmir rupture occurred at depth of around 16.1 miles (26 km). The shallower the quake, the greater its intensity and potential for damage above ground. 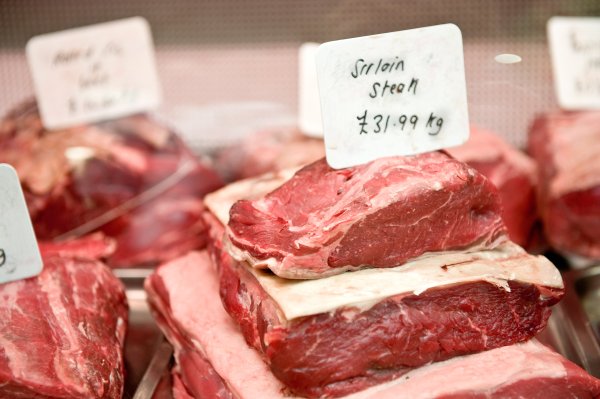 People Are Not Ready to Cut Out Meat, Despite Cancer Risk
Next Up: Editor's Pick