What to Watch For At the CNBC Republican Debate

Less than 100 days out from the Iowa caucuses, Republicans find themselves in the most wide-open GOP contest in at least a generation—and perhaps since 1920, when dark-horse candidates sprung a succession of upsets throughout the spring primaries, and Warren G. Harding, a womanizing newspaper publisher long considered an afterthought in the campaign, triumphed on the 10th ballot at the GOP convention.

So the stakes remain high as the candidates gather in Boulder, Colo., for the third Republican presidential debate Wednesday on CNBC at 8 p.m. Two political amateurs, Donald Trump and Ben Carson, lead in the polls, but many in the party still doubt whether their position will last. Sen. Lindsey Graham, whose 20 years of representing South Carolina can’t even buy him a spot on the main debate stage, may have summed up the establishment frustration best on Monday: “You’ve got the No. 2 guy [who] tried to kill someone at 14, and the No. 1 is high energy and crazy as hell. How am I losing to these people?”

The answer is simple: Voters decide in the end, not pundits, politicians or party functionaries. So each candidate will do their best to change the minds of the people who matter.

Here’s how each of the campaigns stack up heading in:

The state of the campaign: Surprisingly durable. Trump’s nativism, populism and gospel-of-prosperity shtick have mustered a coalition of the aggrieved. He’s staffing up in the states and making plans to mend fences by raising money for the Republican National Committee. The insiders who had long predicted his downfall after beginning to raise alarm that he might actually be able to pull off a win.

Debate goal: Do no harm.

One unanswered question: The core of Trump’s stump speech is about winning: his wealth, his crowds, his poll numbers. But what happens if he starts losing? Ben Carson has seized the lead in Iowa, and now they are tied nationally. Trump has telegraphed his intention to drop out if his support sags, but only he knows what that means. It’s hard to imagine the billionaire developer grinding out a retail battle across the map if things don’t break his way.

What he needs to win: A fractured field. Trump’s incendiary style gives him a lower ceiling than many rivals, but his floor is sturdy. There is no evidence the phenomenon is fading, which heightens the urgency for a competitor to consolidate Establishment support.

The state of the campaign: Bewildering. The doctor seems to gain strength from each new head-scratching position (comparing health-care reform to slavery, opposing a Muslim president, suggesting guns could have prevented the Holocaust). Like Trump, the incendiary rhetoric and the backlash it proves only consolidates his support. He’s proven to be a strong grassroots fundraiser, and his net favorability is the highest in the GOP field.

Debate goal: Keep doing what’s been doing. Despite his spot at center stage, Carson has been a secondary player in both GOP debates. But his soft-spoken style is clearly working for him.

One unanswered question: Is there room for two outsiders in this race?

What he needs to win: Use an Iowa victory to unite conservatives and Tea Party backers, while clearing the plausibility threshold by demonstrating far greater command of the issues than he has to this point.

The state of the campaign: Brimming with untapped potential. Rubio is charismatic, broadly popular across different factions of Republican voters. He has run a deliberately under-the-radar campaign, and the polls reflect both his modest strength and room to grow.

Debate goal: Rubio is perhaps the smoothest speaker in the GOP field and has been a strong performer in both debates, strategically inserting himself into the conversation when it best suited him. Now he’s moved closer to the center of the stage and has to withstand the additionally scrutiny. He committed an error in the first debate, denying his prior support for abortion exceptions for rape and incest victims. Democrats, who view him as a formidable general-election opponent, are ready to pounce if he stumbles in Boulder.

One unanswered question: Will a Republican Party that has spent seven years castigating Barack Obama as in-over-his-head be willing to take a chance on another first-term senator with sparkling oratory and a skimpy resume? The Bush camp has begun to highlight the comparison, telling donors that Rubio is the “GOP Obama.”

What he needs to win: Feed off a Bush decline to consolidate establishment support, while making overtures to conservative voters who view him skeptically after his support for comprehensive immigration reform, but remain open to supporting him.

The state of the campaign: On course. Cruz is running a disciplined campaign, laying the groundwork for a sustained challenge across not only the early voting states but through Super Tuesday on March 1 and the spate of critical states that head to the first winner-take-all polls March 15. He’s well-bankrolled, with a mix of grassroots and high-dollar donors, including a few new whales he just picked up from Rick Perry’s orbit. He looks ready to make a move.

Debate goal: Get into the mix a little more. Cruz is a former collegiate debating champion, and while his performances have been polished, he’s been a secondary player.

One unanswered question: How long does the Carson and Trump boom last?

What he needs: Cruz is in the best position to inherit Trump and Carson supporters if one or both of them fade. But there’s no guarantee that happens in time for the Texas senator to bring together the conservative wing of the party.

The state of the campaign: Not very joyful. Dipping in the polls and in the midst of a massive campaign shakeup, Bush seemed defeatist Saturday as he lamented the anger taking root in the Republican Party. “I’ve got a lot of really cool things I could do other than sit around, being miserable, listening to people demonize me and me feeling compelled to demonize them. That is a joke. Elect Trump if you want that,” he said in South Carolina. After huddling with top donors this week in Houston, Bush is moving forward with a more disciplined and focused campaign, but has to overcome the additional burden of looking like he’s already lost.

Debate goal: A forceful performance that shatters the solidifying narrative that his campaign is in trouble. He’s an awkward debater, more adept at policy than communication. Bush needs to show proficiency at both to stop the slide, while taking shots at his opponents on stage to show he still has the fire in his belly.

One unanswered question: Is he likable enough to surmount the family baggage? Much of the GOP grassroots is avoiding him because of his last name, despite millions already spent on television to define him as “Jeb!” Can he make the rebranding stick?

What he needs: To knock out or hobble Rubio, and perform well enough in the early states for the Right to Rise super PAC death star to nuke his remaining opponents.

The state of the campaign: Fading. The former HP CEO boomed after rising to the second Republican debate stage last month, but has seen her poll numbers swiftly come back down to earth. She’s struggled to respond to criticism of her tumultuous business career, which took additional scrutiny as she rose. And she lacks many of the basic fundamentals of a presidential campaign, having delegated voter contact and field work to her super PAC. She’s the most potent critic of Hillary Clinton, but that’s not enough to win the nomination.

Debate goal: Remind voters why they liked her. An effective communicator, Fiorina dazzled the audience in the debate by sparring with Trump and attacking Planned Parenthood, but came under fire for dramatically mischaracterizing a video about the controversial group. She needs to put her skills on display again, without any more miscues.

One unanswered question: With Carson as the new darling of the moment, can Fiorina win over voters looking for an outsider?

What she needs: Carson and Trump to fade, and to establish herself as a more credible challenger to Clinton than those remaining in the race.

The state of the campaign: Lighting himself on fire. The one-time evangelical wonder has found himself overshadowed by Cruz and Carson. He’s resorted to ever-more-provocative rhetoric to gain attention in the conservative press, but has limited appeal beyond Iowa and the South. His latest ad begins with a grisly voice over, “Washington: It’s a strip club,” which Huckabee then promises to “burn down.” “No more losing,” he says, in an echo of Trump.

Debate goal: More of the same. Continue his flame-throwing, in hopes of staying alive for the others in the race to fall. And use his vast experience on television to connect with voters who have so far passed him over.

One unanswered question: How long he can sustain a waiting-game campaign without an effective super PAC or strong grassroots fundraising?

What he needs: Carson and Cruz to falter, so that he can once again become the choice of the party’s evangelical base.

The state of the campaign: He livestreamed an entire day on the campaign trail and has spent the last month combating the narrative that his campaign is in free fall. But there is little doubt that his ambition of broadening the Republican Party has been clipped. Instead, he’s running a retread of his father’s libertarian-focused campaign, as many of his father’s supporters have abandoned the son for more exciting candidates.

Debate goal: Remind people that he’s there. Paul has struggled to make his mark on the debate stage, instead becoming the punching bag for Trump and Chris Christie, among others. The economic-themed event provides him an opening to talk about his core issues, if he doesn’t get steam-rolled.

One unanswered question: Can he win back over his father’s ardent supporters after abandoning them in a fruitless search to expand his appeal?

What he needs: To pull off an Iowa upset win with the help of the youth vote, and then consolidate the anti-establishment forces within the GOP.

The state of the campaign: Once the party’s bull elephant, he’s been relegated to afterthought. His fundraising has been anemic and his New Hampshire-centric strategy is shared by Bush and John Kasich. Broadly distrusted by conservatives, Christie has tried to win them over by arguing that the party needs pragmatism, releasing a host of policy proposals ahead of many of his rivals.

Debate goal: To try to break out. Christie has fought to remain on the debate stage, narrowly qualifying with his low poll numbers. He’s managed to be an effective debater in the first two contests, but has not been rewarded in the polls. One of the most naturally gifted communicators, he’s looking for a moment in which to stand out—in a good way.

One unanswered question: In a year in which the outsiders are being rewarded, can a blue-state government insider win them over with a message of pragmatism?

What he needs: Jeb Bush’s slide to continue, Rubio to fade under additional scrutiny, and to pull off a victory in New Hampshire.

The state of the campaign: In a season of outsider agita, balanced-budget town halls may not be enough to give Kasich a spark. He’s preaching a message of compassionate conservatism, optimism, and competence as voters look for the opposite.

Debate goal: To sound different than everyone else. Kasich is betting that there are enough voters who are sick of the angry rhetoric that his more positive tone will bring him support, and he needs to make that contrast evident on stage.

One unanswered question: Will voters embrace a politician this cycle who openly brags about his time in government service?

What he needs: To position himself as the experienced alternative to a fading Bush. 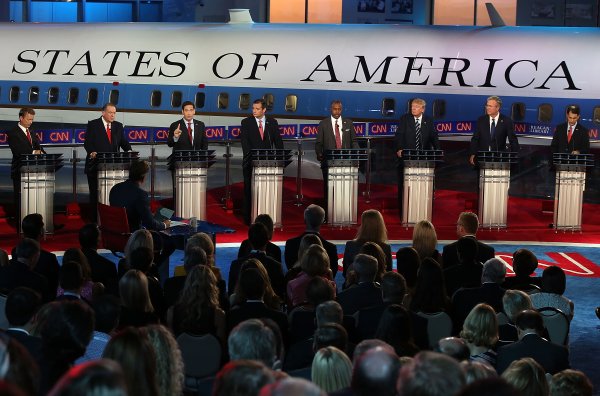 Watch All the Republican Debates So Far in Under 2 Minutes
Next Up: Editor's Pick