If there was ever any doubt, there isn’t anymore. Former Florida Gov. Jeb Bush sees the campaign of Florida Sen. Marco Rubio as the major obstacle between himself and the White House, and he’s willing to take the fight to his former protégé.

Bush’s top advisors delivered a presentation to assuage concerns about the campaign’s tumultuous three months at a summit for the campaign’s top donors in Houston Monday, delivering an optimistic look at the path ahead, and a sharp blow to a top rival.

But its most pointed critique was of Rubio’s qualifications for office, coming just weeks after Bush himself said Rubio didn’t have a track record of accomplishment. “We need to offer a contrast to the current President. Hillary will pitch competence and experience. Marco is a GOP Obama,” the presentation stated in a preview of a possible general election match-up next November.

“Rubio and President Obama have strikingly similar profiles,” it continues, “first-term senators, lawyers and university lecturers, served in part-time state legislatures for eight years, had few legislative accomplishments, and haven’t shown much interest in the process of advancing legislation and getting results.”

The aides argued that in a match-up against Clinton, Bush would win according to a September Quinnipiac University poll, and win a higher percentage of the Hispanic vote than Rubio.

Another slide, titled “those closest to Marco choose Jeb,” notes that Bush has cleaned up among Florida lawmaker endorsements, while Rubio has struggled to win over support.

Bush and his super PAC have spent vastly more than his GOP rivals on television, but he has yet to be able to move the needle. The Bush aides argued that the electorate remains volatile and that the campaign’s focus on fundamentals like data analysis and organizing will pay off in the end. The pro-Bush effort also has the most television inventory reserved for the coming months on the GOP side.

The meeting comes at a pivotal time for Bush, days after he announced a massive reshuffling of his campaign organization, as well as a 40 percent cut to campaign payroll. Later Monday, the donors will hear Bush and his brother, former President George W. Bush, participate in a joint discussion. 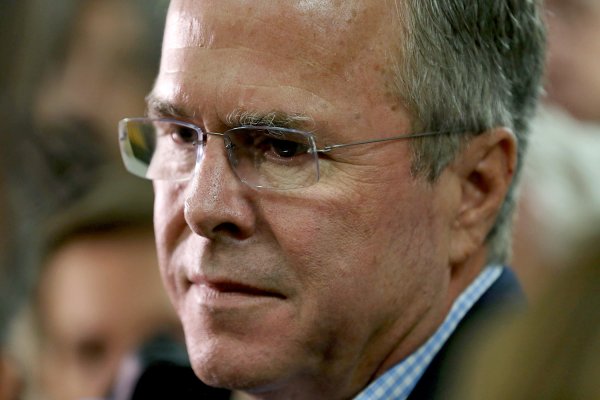