Did The Walking Dead Just Kill Off A Main Character?

Sunday night’s “Thank You” episode of The Walking Dead left viewers horrified… and more than likely just a little bit confused. And when it ended, many likely asked themselves, “Wait, did Glenn just die?”

To recap, Glenn and Nicholas were running from a herd of walkers when they found themselves trapped — a gate on one side and a sea of zombies on the other. They blasted a few with their guns and then climbed on top of a dumpster. As walkers reached for their feet all around, a dazed Nicholas looked at Glenn, said “Thank you” and then blew his own brains out. Both bodies then tumbled onto the ground where we saw them engulfed by zombies who appeared to be feasting upon guts and intestines as Glenn looked up in horror. So is Glenn dead? We present reasons to believe why the answer could be both yes and no before delivering a verdict.

GLENN IS DEAD
The episode dropped clues both big and small that it could be Glenn’s time to go. We see him have a nice moment looking at Hershel’s pocket watch. We hear him calling Rick a “dumbass” over the radio, which serves as a nice call back to when they first met and Glenn said “Guess that makes me an even bigger dumbass than you.” We see him acting the hero by giving himself the job to burn down the building. In essence, this episode could serve as the final act in Glenn’s maturation from pizza delivery boy to full-blown leader. He goes out a hero by dying in his quest to protect others.

GLENN IS NOT DEAD
The incident happens with 10 minutes left in the episode. Usually big character deaths happen right at the very end of an installment because really, what can possibly top that? And how are audiences expected to transition from a major character dying to Michonne and two newcomers limping through the woods? If Glenn were going to be taken out, wouldn’t he be taken out at the very end instead of then having a quarter of the episode still to go?

GLENN IS DEAD
The big scene ends with Glenn on the ground surrounded by hundreds of zombies eating human insides right on top of him. That is the very definition of dead. How the hell is someone expected to survive that?

GLENN IS NOT DEAD
But whose human insides are they? Not to break the scene down like the freakin’ Zapruder film, but if you go back and watch the scene, Nicholas clearly falls on top of Glenn as the bodies go down toward the pavement. So those zombies could be feasting on the first course of Nicholas since he is in top and more accessible. However…

GLENN IS DEAD
Wouldn’t they eventually get to Glenn? Are we really supposed to believe that they would only eat one body and not two? However…

GLENN IS NOT DEAD
Might Nicholas’ dead guts spread all over Glenn mask his scent as a living, breathing being? (Or do they have to be guts of a full-blown zombie as opposed to just guts of a dead person to mask the human scent? Also — and this is getting a bit off-topic — why didn’t Glenn and Nicholas just spread zombie guys all over themselves to begin with, like Glenn did back in season 1 or like Carol did to infiltrate Terminus?) Maybe the walkers had their fill of Nicholas and just never worked their way through to Glenn. However…

GLENN IS DEAD
Are we really expected to buy that not a single zombie would have made a stray bite on Glenn’s face, neck, or wherever? That seems highly unlikely. However…and this is where it is going to be get potentially very spoilery based on events in the comic book, so if you do not want to know what happens in The Walking Dead comic then STOP READING RIGHT NOW.

GLENN IS NOT DEAD
Okay, I’m giving us a minute to make sure that everyone that does not want to know events from the comic clear out. So clear out now if you don’t want to know. LAST WARNING! Okay, we all good here? Great, let’s move on. Readers of the comic know that Glenn does, in fact, die relatively soon in that version when a new villain named Negan appears on the scene and bashes in Glenn’s face with a barbed-wire covered baseball bat named Lucille. This happens in issue #100 and is one of the biggest moments in the entire series.

Steven Yeun and I have discussed this event several times over the years and whether it would come to pass (no pun intended) in the show as well. As we know, the TV show does not exactly mirror the comics. Carol is long dead in the comic while Andrea is still alive. And it was Tyreese, not Hershel, that was beheaded by the Governor at the prison in the original version. So things do not always line up, which is nice because it keeps you guessing.

Yeun’s take has been that it is too big a moment for it not to happen and that fans might feel cheated if it does not go down on the TV show. I’ve always felt that the biggest shock the producers could deliver is making the audience believe it is going to go down that way, only at the last minute “remixing” the result (as showrunner Scott M, Gimple likes to do) and having it occur to someone else instead (Aaron? Abraham? Sasha?). However, for that scenario to play out, you still need Glenn alive at that point. Which means you can’t kill him here.

THE VERDICT…
While it seems practically impossible for Glenn to escape this situation alive, the whole moment (and in some ways, episode) seems to belong to Nicholas. He is the one we see all episode dealing with the past tragedy he led his team on and coming to grips with that. He is the one that has to kill one of his former Alexandrians that turned because of his own incompetence and cowardice. He is the one who thanks Glenn for showing him a better side of himself before the end, and he is the one who ultimately sacrifices himself (perhaps) so the zombies can feast on him instead of Glenn. If Glenn is going to die, it will be his moment and his moment alone, not as part of another character’s arc.

In addition, the moment with Negan is just too big. Producers have played with this before, having Glenn one second away from being killed by a baseball bat at Terminus. They openly acknowledged that was a way to have some fun with fans who knew about Negan/Lucille. They are well aware everyone is waiting to see if that will play out on screen as it did in the comic, and to let that play out, Glenn needs to stay alive until Negan is introduced (which could be as soon as the back half of this season). So the verdict here is that Glenn is still alive.

The hard part now is that the way this season is structured in showing the same day playing out in different places with different characters, it could potentially be a few weeks before we get our final answer. So we can all die a little inside until then not knowing the truth. 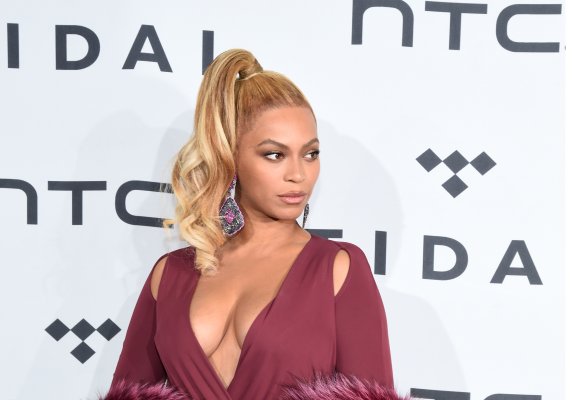 Beyoncé Dressed Up as Storm for Ciara's Birthday Party
Next Up: Editor's Pick