Poll: Trump and Carson Tied for Top Spot in Iowa

GOP presidential candidates Donald Trump and Ben Carson are tied for the top spot in the Iowa primary with 27% of the vote, according to a new CBS News poll, the latest to show the two competing for the nomination.

Two other CBS news polls released at the same time show Trump and Carson as the top two candidates in the early-voting states of New Hampshire and South Carolina, although Trump maintains a clear lead over Carson in both of those states. In South Carolina, Trump has 40% of the vote, compared with Carson’s 23%. In New Hampshire, Trump has 38% of the vote while Carson has 12%.

The poll reflects an apparent frustration in politicians and the Republican establishment. Trump, a billionaire real estate developer, and Carson, a neurosurgeon, have little political experience and have never held elective office.

The Iowa, New Hampshire and South Carolina polls had margins of error of plus or minus 4.8, 5.6 and 4.8 percentage points, respectively. 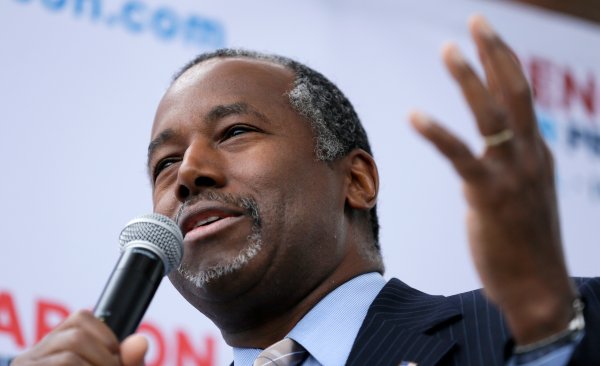