Hillary Clinton capped off the best two weeks in her campaign so far by throwing herself a giant party.

When the Democratic presidential candidate landed in Iowa Saturday for the state party’s Jefferson-Jackson Dinner, she was greeted by a blast of red, white and blue confetti; her husband, the popular former president; pop singer Katy Perry and 4,000 adulatory fans.

The celebration came after Clinton shined in two bouts of political hazing. First, she gained the upper hand at the first Democratic debate with her arch-rival Vermont Sen. Bernie Sanders, allowing her to answer criticism of her private email server before an audience of millions. Then, Clinton endured a marathon 11-hours of accusatory questions from House Republicans over the attacks on Benghazi, Libya.

In the late afternoon autumn sun in Des Moines on Saturday, Clinton campaigned with a renewed vigor, seeking to demonstrate that she could draw the biggest names and the biggest crowds.

“I stand, and I march with Hillary. I believe in her vision!” Perry said, before launching into “Firework.”

“Baby you’re a firework,” she sang. “Come on let your colors burst, make them go ah-ah-ah.” Boom! American flag-colored confetti burst over the crowd and Clinton came on stage, holding Perry’s hand. They hugged warmly and Bill Clinton joined them on stage.

“Sometimes you just have to roar about what you have to fight for!” Hillary said to raucous cheers, citing another Perry song.

The party came at an auspicious time. The Democratic dinner in Des Moines is a key date on the Iowa calendar, and a strong appearance just 100 days until the state caucus can define the rest of the primary. In 2007, Clinton underperformed at the event, leaving empty seats in her section at the dinner—a cardinal sin at a fundraising event. Then-Sen. Barack Obama seized his moment, raising the roof with a speech criticizing partisanship in Washington, D.C., and went on to win the nomination.

Sanders attracts many thousands to his rallies, and the crowds go wild when the white-haired Vermont senator hoarsely brags that it’s all really, really big, and they are making history. At the typical Clinton rally, on the other hand, the music is loud and there are often too many staff. The pace sometimes slows and the energy is brittle.

Saturday was one of the few times Clinton clearly outnumbered Sanders supporters in her rallies. With help from her star attractions, Clinton packed more than 4,000 people into a parking lot in downtown Des Moines, while Sanders drew around 2,000 to his rally, according to aides.

Even before the rally, Clinton aides were in a jubilant mood as they got the crowd hyped. Eager Clinton organizers skipped laps in front of the assembled attendees, yelling slogans and trying to get everyone to do the wave. “The Hillary campaign is really starting to generate some momentum,” Doug Strutzenberg, a retired supervisor at a local casino who had come to see Clinton, said. “This event is going to be indicative of that.”

Meanwhile, just across the Des Moines River and closer to the gold-domed statehouse, Sanders’ campaign workers were setting up dividing rails between the rally and the street. A volunteer grabbed an armful of American flags from the back of a track. A local folk singer, David Moore, was singing something approximating Sanders’ stump speech with a bass like Johnny Cash and wheezing into a harmonica. A typical lyric referenced people serving long prison sentences: “Some of them haven’t done shit, maybe just a little bit / And they’re living in a living hell,” Moore sang. “I said I’m feeling the Bern, I’m feeling the Bern / Maybe just maybe, it’s enough already / Baby, I’m feeling the Bern.”

A retired state employee and Sanders devotee at his rally said she wasn’t worried about Clinton’s recent rise. “I think the difference between Bernie and Hillary could not be more clear,” said Barbara Bobb a retired state employee. “The same way it ended for Obama eight years ago is how it’s going to end up here.” Then she dug it in: “Poor Hillary. Always a bridesmaid.”

A little later back across the river, former president Bill Clinton went on stage to gloat about his wife. “The American people in the last six weeks have learned a lot about Hillary—what she’s for and what kind of president she’d be,” he said. “If they watched Saturday Night Live then they know she’s a pretty good bartender, too.” The crowd cheered. When Katy Perry had finished singing and Sanders finished stumping by the early evening, the two campaigns hauled about 2,000 each of their supporters into the convention hall for the dinner. Dueling rallying cries rang through the main space: “Feel the Bern!” and “I’m with her!” There were pulled pork sandwiches, pickles, vanilla cake and plenty of booze.

(Also at the dinner was former Maryland Gov. Martin O’Malley, seeking to drum up support for his languishing campaign. His son, William, a senior in high school, was spotted walking the floor with a lemonade and nachos. He told a reporter that one thing he loves about about his candidate father is that “he knows why he’s doing this.” The teenaged William was asked whether he would one day be involved in politics. “I hope not,” he said firmly.)

Of the three presidential candidates, Sanders spoke first. He used his speech to sharply criticize Clinton during his speech, suggesting that she panders to public opinion in order to gain ground in polls. “I promise you tonight as your president I will govern based on principle not poll numbers,” he told the crowd.

Clinton was on last, and she appeared relaxed and confident. A disciplined and highly energized crowd held glow sticks that lit up half the huge hall an eerie blue for the grand finale. They roared deafeningly when Clinton came on, and a couple enthusiasts banged chairs so vigorously on the ground it looked like they were trying to destroy them. “I’m with her, I’m with her,” they screamed.

Clinton’s speech was a bricolage of canned lines from her past few months on the campaign trail. She identified herself closely with President Obama, saying Democrats need to build on his accomplishments. She said Democrats need to fight for paid family leave and to raise the minimum wage. She argued that the Republicans have stacked the deck for those on top, but promised that “I’m listening to you, I’m fighting for you, and with your support, Iowa, I’m going to deliver.”

“And together, we’re going to build an America where there are no ceilings for anyone, where no one gets left behind or left out, and yes, where a father can tell his daughter, you can be anything you want to be, including President of the United States of America!” Clinton said.

It was a stump speech that many had heard before. But like hearing a favorite pop song at a concert, its familiarity was key to its success. Clinton’s supporters, too, were ready to party.

Read Next: How Hillary Clinton Won the Benghazi Hearing 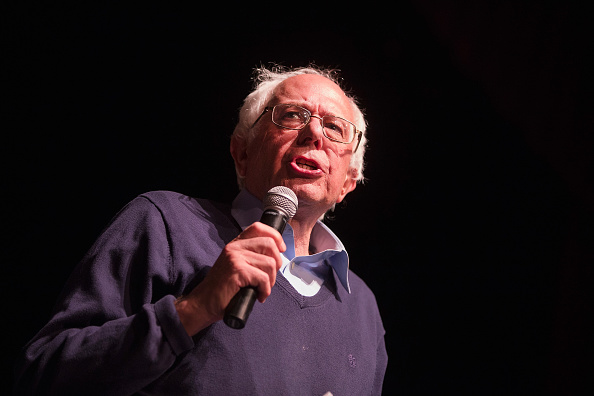 Sanders Goes on Offense Against Clinton in Key Iowa Dinner
Next Up: Editor's Pick